The students of Tangla College boycotted the classes on Friday accusing the Principal Dr. Prasen Daimari of man handling the Assistant General Secretary Pankaj Dkhar on Feb 9. As per information Dkhar went to Principal's office to submit the Saraswati Puja budget. But when the Principal allowed only Rs.15000. He argued with the Principal. The Principal manhandled him in front of other members of the student body of the college. The students refrained from attending classes and democratically protested. The students shouted slogans Prasen Daimari Go back,We want his transfer. Pranab Mandal led the agitation.  Tangla College is one of the pioneering institutions of repute in entire B.T.C. The college has all the three streams beside GU IDOL classes are also held.  The college was accredited with B grade by NAAC in 2004. 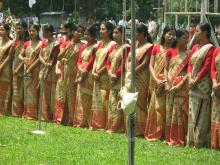 16 May 2009 - 3:32pm | Ranjan K Baruah
The most interesting Youth Festival under Gauhati University (GU) began on 16th May with various programmes. Colleges affiliated to Gauhati University from different part of the Asom have...

28 Jan 2013 - 7:04pm | AT News
Dr Debo Prasad Barooah no more. The veteran thinker and educationist passes away on Monday. He was 83.The end came at 4-30 in the afternoon after the International Hospital where he was undergoing...