With the state government miserably failing to take up any concrete measures to tackle the issue of climate change, concerned social leaders, intellectuals and NGOs of Ukhrul on Wednesday minutely deliberated on the global phenomenon and unanimously endorsed the formation of a new committee to facilitate a common pathway in addressing the climate crisis.

While there have been numerous debates and deliberations on the issue at different levels in the district, no tangible initiatives have been taken up by any organizations/NGOs so far. Time has come for the public leaders of the district to institute a special platform to host authentic, inclusive, reflective and insightful communication among the people to enhance the community capacity to address the climate crisis where the government has little concern. This was the common reflection of the day's deliberation on the critical issue held at the office of Ramungo Library Group (RLG), Phungreitang.

In the contemporary context of Ukhrul, people are merely informed but remain insensitive to the impending threat of climate crisis. After all, one tends to ignore the issue in the absence of any accurate physical evidence of effects of climate change , opined Ramthar senior staff RLG, adding that fast depletion of Shirui water sources may be one impact.

In the same vein, Gajendra Prasad of PASDO Ukhrul questioned as to why Manipur does not have its forum for Sustainable Mountain Development which all the 11 Hill States of India including Nagaland and Sikkim have.

In order to tackle climate change in the district, TNL has come up with a restriction on exporting of charcoal, firewood and pinewood, said general secretary Nobert Khayi adding that this is clearly stated in its recently produced  constitutional publication on preserving land & natural resources in the district.

Citing the biblical context, Dr Ngahorshai Luithui expounded that human beings are mere steward of God's creation and it's against Hill will that we destroy nature and its resources. Protection of nature reflects true relationship between man and God for we cannot love God and hate His creation, he added.

While Wungpam Kasar of Elshadai felt that reaching out to the far off villagers with adequate information on climate crisis remains a tough task, senior citizen Ms Janeth insisted that the government has a big role in providing alternative arrangement keep them from subsistence related activities in the villages.

With the talk positively taking shape, a workshop on the climate crisis has been slated for 22 April next in connection with the World Earth Day. 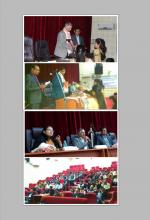 20 Jan 2018 - 2:08pm | AT News
GUWAHATI: A central agency of late, has revealed that all is not going well for the farming community in Assam. Lack of an affective mechanism from the part of the government is to be blamed for...

26 Aug 2018 - 3:55pm | Nikhil Mundra
Hojai:- Like other parts of the country the festival of Raksha Bandhan signifying the tying of sacred threads (Rakhis) by sisters on the wrists of their brothers was celebrated with religious fervor...

22 Sep 2018 - 2:19pm | CM Paul
Darjeeling — "Human trafficking is one of the biggest criminal enterprises in the world along with drugs and arms trade," says a scholar from Darjeeling.  The International Labour Organization’...