With the inhabitants of scores of border villages in Eastern Ukhrul reeling under acute hardships after multiple landslides cut off the region from the rest of the district, Chatric DCC councilor Yangmi Shimray has drawn the attention of the state government to restore the road communication in the area at once.

Addressing a press conference at UDWJA office on Monday evening, councilor Yangmi Shimray said that following the recent heavy rainstorms, the border region has remained cut off from the rest of the district due to multiple landslides that occurred at various points along the road from Shirui to Khayang village.

As a result, villagers in more than 20 villages in the area are facing tough times as they have run out of most essential commodities after landslides at many places blocked the only road connecting the region,  he related while adding that in cases of transportation of ill persons, the inhabitants are facing the worst fate.

"With no other options left for the villagers, they transported a seriously sick person AS Yaoreingam on foot from Mapum village to Ukhrul Town today," Yangmi said adding that such is the living condition of the people in the area.

Similarly, the other road from Gamnom to Mapum via Pushing village route was also damaged by huge landslides, leaving the inhabitants completely disconnected.

"So my earnest appeal to the government is to immediately look in to the prevailing situation there, and take up necessary steps to clear the debris so as to restore the road communication in the region at the soonest, "he pleaded.
At the same time, Yangmi also appealed to the government to despatch an inspection team to oversee the condition of scores of Paddy fields affected by the recent rain storms in the region. 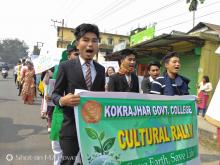 2 Feb 2020 - 8:07pm | AT Kokrajhar Bureau
KOKRAJHAR: The Diamond Jubilee celebration of Kokrajhar Govt College was concluded on Sunday with a week long programme held at the college complex. The diamond jubilee was celebrated with...

28 Jul 2015 - 9:52am | AT Political Bureau
Assembly polls are on the threshold. Dreams are back for sale. Mercury goes up, up and up in the pre poll political landscape. All parties are gearing up for the show early next year. Precisely, BJP...