Bangalore and Shillong based Jim Ankan Deka was a self-taught musician and had been performing from the age of three. He was also professionally trained in the Assamese Vaisnavite music of Borgeet and playing with khol during his childhood. From early teens he had been assisting in film direction, and was the chief assistant director of several documentary films including Assam Sahitya Sabha, Srimanta Sankardev and under-production full-length docu-feature biopic film Moi Eti Zazabor jointly directed by late Waesqurni Bora and Arnab Jan Deka, which is based on the life of legendary musician and Columbia University(New York) scholar Dr Bhupen Hazarika. Jim Ankan Deka brought out his first musical album Tumi Kowa Kothabor—The Things You Said in 1999 as an eighteen year old teenage prodigy with his own lyrics and composition. He shifted base to Bangalore in 2006 and set up his independent music studio and formed two music bands called Eastern Fare and Veenar, and has been composing songs and performing all over India and beyond. His pan-Indian and international musical foray had manifested in several albums of fusion music between Assamese and Hindi, Kannada, Bengali and English. He is also involved in trans-continental documentary film productions making his directorial debut with an Indo-American joint-venture film Nagaland : Journey Through the Choir of Clouds. 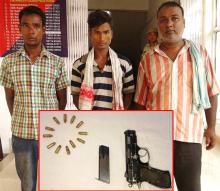 3 Oct 2015 - 8:24pm | Siddhartha Handique
The Golaghat police got remand of Aditya Bora for ten days after the Maoist leaders produced before a local court on Saturday. The court further remanded his two associates from Dergaon to the police...

Program for IAS aspirants in Delhi

10 Nov 2015 - 8:57am | AT New Delhi
An interaction program for civil service aspirants will be held on November 14 at ECA Room Ramjas College, Delhi University. The main speaker of this program is Noor Rahman Shiekh, IFS, First...