As a part of World Environmental Day celebration a plantation drive was carried by students and employees of Tangla  on Sunday. A total of 150 saplings were planted on the college stadium premises on Monday. The plantation drive was carried out under the joint venture of National Social Service unit and Tangla College Students' Union of Tangla College. Around 100 students and employees of College participated in the drive. I am happy that students have turned up in large number in the drive. It is important to plant trees to maintain the ecological balance," said students' union General Secretary Swdwmsa Boro . 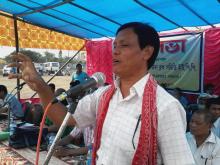 Another jolt for BJP

16 Jul 2016 - 1:16pm | AT News
The high voltage political drama in Arunachal Pradesh is a staggering blow for BJP. The saffron party legislators gave outside support to the Kalikho Pul Government after the Centre lifted the...

19 Mar 2014 - 11:11am | AT News
KMSS seems to have intensified protest against Akhil Gogoi after police arrested the peasant body president in connection with the Dispur self immolation case.Hundreds of KMSS activists thronged...