A day long Ayurvedic health awareness camp was held at Tangla on August 6.The health camp was organised at Lokapriya Bordoloi Smriti Bhawah,Tangla by a group of fifteen health conscious citizens of Tangla.Noted Ayurvedic health care expert Acharjya Pankaj Pathak attended the health awareness camp as the chief guest.Several hundred people mostly woman were present in the awareness camp.Speaking on the occasion Acharjya Pathak advised people on the necessity of taking care of own health with locally available herbs,fruits, vegitables etc able to cure several dreaded diseses like high blood pressure,arthritis,thyroid imbalance, diabatics,hairfall etc.Speaking on use of packaged food,he said that nature had given so many varieties of fruits and vegitables traditionally grown in Assam or NE work against several disesses,which medicines could not cure easily.“Assam being situated in tropical zone,fruits and vegitables like bhimkol etc work as wonder in most of the stomach disorders specially for children.But our parents preffer to packaged foods and cold region fruits like apple which never do good in our climate”,He said.Speaking against packaged child foods he advised parents to change food habit of the children.Acharjya Pathak had also an interactive session with several hundred people including patients,giving advices to their specific health problems.Social worker Dina Nath Das of Tangla also spoke a few words on the occasion. 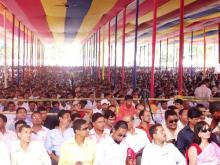 15 Oct 2008 - 2:54am | editor
Its a big big day for regional politics in Assam. Despite stiff resistance the main Opposition Asom Gana Parishad on Tuesday announced its unification of regional forces with former Chief Minister...

ATASU gears up for agitation

20 Jul 2015 - 4:08pm | AT News
The All Tai Ahom Students’ Union will gherao the MPs to raise their demands from July 27. According to ATASU president Pranjal Rajkonwar they will demand ST status to the Tai Ahoms along with five...

28 Aug 2007 - 3:41am | BandanBharadwaj
Guwahati : ULFA Chairman Arabinda Rajkhowa through a statement on Tuesday invited Bodo rebel organisation, NDFB for dialogues to diffuse the tensions between them on several issues and especially on...