Chief Minister Sarbananda Sonowal today visited Kokajhar to take stock of the situation arising out of Friday firing at Balajan Tinali market after 48 hours of the incident. Sonowal landed in a chopper at Patharghat at army camp helipad by 11.15am and straight visited firing site at Balajan Tinali market which claimed 14 civilian and a militant cadre . Bullet injury, 18 persons are under going treatment at Kokrajhar RNB civil hospital and Barpeta medical college since incident.

He was accompanied with cabinet ministers Rihan Daimary, Atul Bora, Pallab Lachan Das. Later, he had a meeting with the BTC leaders and also held a high level security meeting with senior officials from administration, police, army and others at Circuit House in Kokrajhar. CM Sonowal interacted with victim family members who were lost their dear ones in the firing.

CM Sonowal said the government is zero tolerance on militant and whoever responsible will be booked. "Stern actions will be initiated by government against militant outfit organization who were involved with anti society activities",Sonowal said. CM discussed thoroughly on the security alertness activity in BTAD as well across the state with strengthening security deployment ahead Independence Day celebration. Sonowal promised for restorations of peace and tranquility among different communities in the state with gaining thrust and faith among all sections of society. "We discussed security issues and subjects with CM during his visit to Kokrajhar. The meeting emphasized to gain security strengthening to stop militant and anti social activities in the region", said a senior army officer after a meeting CM Sonowal.

DGP Mukesh Sahay told that police administration has been intensified counter insurgency operation against militant outfit organizations in the state. "There was handi work of NDFB-S behind Balajan Tinali market attacked because a cadre of the organization was death in the encounter firing", Sahay said. Agriculture Minister Atul Bora, Rihan Daimary termed the incident unwanted incident where innocent peoples lost their lives. 'We hope involved culprits would be booked in earliest manner', Bora said.

30 May 2015 - 5:58pm | AT News
Pranshree Kalita tops the HS science stream while his counterpart in the arts stream is Manash Pratim Goswami. Sweta Agarwal tops the commerce stream as the Assam Higher Secondary Education Council...

15 Dec 2009 - 11:21am | Jayanta Kumar Das
Nature loving people of Darrang and Udalguri districts have rejoiced at the safe return of the seven years old rhino,which had strayed away from Orang National Park on December 12. After traveling a... 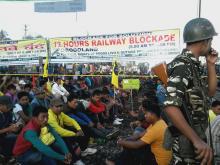 24 Oct 2016 - 9:21pm | AT Kokrajhar Bureau
rain services in lower Assam regions along the Northeastern Frontier Railway(NFR) via Kokrajhar,Bew Bongaigaon were disrupted for ten hours today due to 12-hours rail blockade at Basugaon rail...