Dredging the Brahmaputra is not a sole solution to minimie the flood and erosion problem of Assam. Scientists and experts say that the sole plan to dredge the riverbed will not help to solve the problem. A K Mitra, the former Secretary of Water Resource Department of government of Assam, says that dredging Brahmaputra is just an idea proposed about. It is still in theoritical state which would be difficult to implement without a total plan. Flood in Assam needs multi measures to minimise it, Mitra said. China had success story of dredging Huawang Ho on account of its multi-measures, he recalled with his field experience in China. In Assam it cann't be succeess unlesss and until some measures are taken in advance before dradging. The Assam government is taking seriously dredging of the Brahmaputra river as an way to mitigate the flood and erosion problem. Some engineers and scientists suggests to dig the river bed as it can carry more water without causing flood problems.

In a seminar on 'Policy Dialogue for Governance of the Brahmaputra River' held in Itanagar, the capital city of Arunachal Pradesh was organised by SACIWATER, a Hyderabad based organisation for water-conservation in Asia, a number of engineers and experts discussed about dredging. Most of the scientists and experts in hydrology do not agree with the move of Brahmaputra dredging. Pradip Pujari, formerly with Brahmaputra Board and a consultant engineer, also said that dredging is not an answer to solve or mitigate the flood and erosion problem, if other pre-measures are not taken. Rather it will be a waste of money , energy and time. He emphasized on checking siltation in upstream of rivers . Multi-purpose hydro electric project with special function can check silt at upper level and help to minimize both flood and siltation problem in down stream. He suggests a mechanism to check silt and remove the silt from the dam. If silt carried by rivers are not stopped all efforts would be futile and deep river-bed would be filled up with sand and silt again with the very next flood water, he said.

Assam Government declared dredging as an answer to solve the flood and erosion problem. Government declared that the World Bank had sanctioned Rs 980 crore to dredge the river. But, it will not help to minimize flood and erosion problem anyway. Assam chief minister Sarbananda Sonowal told media last month that dredging of the Brahmaputra would yield a plethora of benefits. It is possible that erosion would be reduced as the depth of the river bed would increase and the force of the water would be less on the banks . He added that the exercise could be carried out along all the affected spots including Majuli which he represents in the assembly. Bharat Saikia, a former superintendent engineer in the department of water resources and expert on erosion said earlier for dredging to be effective, it is first necessary to understand the nature and quantity of silt deposition. Silt gets deposited very fast and so it is doubtful if such schemes would be successful.

Considering the annual silt load of Brahmaputra, water carrying capacity of the river has been reduced to an extent causing floods in the state when there was incessant rains during summer. It is very common and simple idea that making depper the river bed or dreging of the river bed will help to control flood and erosion problems in Assam. But I don't think so. Because siltation and sedimentation are continuous process which occurs with the flow of water. Dredging can't be a sole answer to the problem of flood and erosion that has been gobbling up hundreds of acres of land every year on both banks of the river. Engineers and experts must invent a mechanism which will check siltation in the upstream of rivers.

If silt and sediment carried by the Siang (Brahmaputra in Arunachal Pradesh) and its tributaries are not stopped, all efforts would be waste of money and energy. Sand and silt will fill the dredged river-bed again. So, in stead of dredging the Brahmaputra, dredging of wetlands and shallow river beds of tributaries of the Brahmaputra (Yarlung Zangbo) will be more effective. Dragging wetlands and rivers like Jiadhal, Gainadi etc. will minimize the sediment and silt deposited in the riverbed of Brahmaputra.

Wetlands in Assam have a great role to minimize flood. Because wetlands store a large amount of excess water during flood. According to ENVIS center Assam 690 lakes and ponds recorded in Assam. These lakes /ponds cover an area of 15494.00 ha which constitutes 0.20 percent of the total geographical area of the state and 15.30 percent of the total area under wetlands. The smallest of them measures 2.50 ha while the largest one has 882.50 ha of areal coverage. But most of wetlands in the state have became shallow due to silt and sediment deposition. As they are becoming shallow the capacity of flood water storage also decreasing. So if these wetlands can be dredged and make deeper these will have more capacity to store more amount of flood water. Apart from flood and erosion mitigation, dredging wetlands will help farmers with irrigation and fishery for winter cultivation.

11 May 2015 - 5:39pm | AT News
Journalists’ Forum Assam (JFA) decries the attitude of Delhi government led by Arvind Kejriwal towards the media, where the self-claimed ‘progressive, democratic and honest’ political icon has...

4 Jul 2012 - 1:15am | editor
Renowned poet Hiren Bhatta remains unchanged in his health condition who is undergoing treatment at the Dispur Hospital. Doctors attending on him said that his condition is still critical and that...

Tribute to APJ with a difference 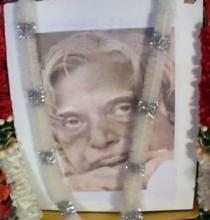 29 Jul 2015 - 9:59am | Anamika Dutta
The massive homage for Dr APJ Abdul Kalam seems to have brought an artist to limelight in Lumding.Popularly known as Gautam Bardhan, the painting artist in Lumding has paid his tribute to the former...
Follow @Assam Times