Sangti - the valley of Tibetan Crane

While high transmission wires offer a resting place to thousands of the Amur falcons, pausing briefly in Northeast India on their journey to southern Africa, the wires have brought doom for one of the endangered avian species, the Blacked-necked crane in Northeast India. The cranes collide with the metal grid wire line as they land and take off within the Valley. The species is classified as Vulnerable in the IUCN Red List because it has a single small population that is in decline owing to the loss and degradation of wetlands, and changing agricultural practices in both its breeding and wintering grounds.

The small population of the Black-necked Crane or the Tibetan Crane, now face another threat—threat from power-lines in one of its wintering habitat in India. The Sangti valley in Arunachal Pradesh is one of the two places in India that is a wintering habitat for the Cranes. 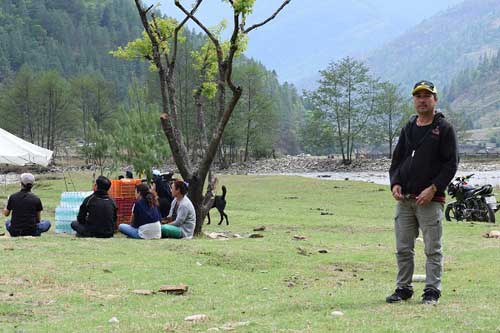 Situated beneath the towering snow-capped Sela Peak of the Eastern Himalayan ranges the Sangti Valley in Arunachal Pradesh is known as paradise of colourful birds and tribal cultures. To the visitor, the beautiful valley poses as a picture postcard complete with the flowing Sangti, pine forests, tiny hamlets, wildflowers in the alpine meadows and grazing cattle and horses.

Blessed with pleasant weather round the year and sometimes flakes of snow during the winter months Sangti is sandwiched between Bomdila and Tawang in the strategically important Indo-China border. The valley is situated about 15 kilometres away from the township of Dirang on the Bomdila – Tawang highway of Western Arunachal Pradesh in North East India. Apple, orange, kiwi, apricot, pineapples, maize grow abundant in the valley enriched by swift flowing rivers. The Monpa tribe is the dominant tribe in the Valley considered as a trekker’s dream destination.

A variety of habitats from sub tropical and warm broadleaved forests to cool broadleaved forests, Coniferous, Fir, Oak, bamboo, Juniper, Rhododendron and alpine scrubland invites feathered guest come from Tibet as well as China. Songs of native and migratory birds echo through the valley. The Black-necked crane (Grus nigricollis) ) is the most important of the migratory winged visitors to the Sangti Valley.

Arrival of the rare cranes are considered auspicious by the people and they revear the cranes as a symbol of fortune.​

The rare bird is eulogized in the verses of Tsangyang Gyatso, a local Monpa from Tawang. The lamas of the predominantly Buddhist Tawang district of Arunachal Pradesh rejoice every winter with the arrival of the sacred Black-necked crane. Zemithang and Sangty Valley in West Kameng district of Arunachal Pradesh are the only two winter habitats for the avian species in India.

Decline in numbers of Black-necked crane

Black necked crane, found in found in the lower altitudes of Quinghai, on the Yunnan-Guizhou Plateau in China and, north-eastern Bhutan and Arunachal Pradesh in India. They breed in high-altitude wetlands of the Tibetan plateau in China. During breeding season, it is confined to high altitude wetlands at an elevation ranging from 2950 to 4900 meters above mean sea level.

Sangti valley in Arunachal Pradesh is one of the two places in India that is a wintering habitat for the rare avian species, the other is Ladakh. The decline in numbers of Black-necked Cranes is not only matter of concern among conservationists, but of local people too. Each year, for the last two decades, the number of the species visiting Arunachal has come down between 2 to 11 only. Locally called ‘Thung Thung Karmu’, the birds arrive during November-December and stay here till the climate is mild. They depart around February-March every year when mercury starts rising. Due to loss and degradation of natural wetlands, water birds increasingly rely on surrounding human-dominated habitats for their food. The roosting-site of black-necked cranes was affected by human disturbance.

In recent times five Black-necked Cranes were spotted at rice field of Chug (Chanpga) valley near Dirang in Arunachal Pradesh. Local people told us that they feel the Cranes chose this site because of lesser disturbance. Apart from shrinking wetlands, high voltage power line and feral dogs pose threats to the winter visitors.

Death of cranes due to electrocution

Two birds died after getting stuck at a high voltage power line at Sangti Valley in January this year. The presence of high tension wires in the crane habitat – supply lines cut right across the valley –continues to be a threat. The first incident came to light in 2007 when one crane was electrocuted. The 30,000 volt power line was constructed through the Sangti valley 15 years back.

“There are incidents of Crane deaths almost every season and the number of the crane declined since the construction of the power line. Birds collide with the metal grid wire line hanging when they fly away from the paddy fields to safer place every evening and come back in the morning within the Valley. They collide with the invisible wire when they take off and during landing,” said Pasang Dorjee, a local youth of Dirang.

“Shifting the killer power line erected between the feeding ground and the river at Sangti Valley would put a stop to the terrible deaths and it would make the valley a more hospitable wintering site,” he added.

Local people were concerned when the construction of the power grid line was started, but they could not resist it as it was a government decision. The bird had changed their migratory route, perhaps after witnessing the danger and fate of their mates. The presence of the high voltage wires made the cranes, already so less in number, more insecure in the Sangti valley.

The decline in numbers of crane every season disappoints not only locals but bird watchers form far and wide. Tourism has seen a boom in Bomdilla- Dirang- Tawang circuit and there had been more footfalls because of the cranes. The Black-necked cranes of the valley are an added attraction, Tsering said.

Phorpa Tsering, who works for Sangti Monastery said that the fatal impact of the power line could be felt when there were no sightings of the bird between the years 2009 to 2014 in the traditional habitats of the Valley. He recounted the first incident he witnessed in 2005 when a rare crane was hanging on the wires.

As a signatory to the Convention on Migratory Species (CMS), India is duty bound to provide safety to this rare bird. Appropriate action plans to save the birds from any more electrocution-related death is a pre –requisite for the long-term conservation of this bird. 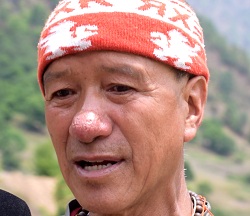 “It would not be difficult to divert the power line toward the hillside. There is enough community land for the diversion or optional grid post construction. It should not have been constructed through the valley,” Sange Tsering, a local social worker said. The local political representative certainly could recommend for the diversion and play a role in the conservation of the black-necked Crane, feels Tsering.

9 Dec 2017 - 12:45pm | AT News
GUWAHATI: Chief Minister Sarbananda Sonowal said that agriculture is the mainstay for the economic growth of the State and mooted that Assam Agricultural University (AAU) should take the lead in...