Education minister Himanta Biswa Sarma is facing no less ire after the HSLC faux pas where many examination centres received Assamese and social science question papers instead if mathematics.

AASU leaders and activists in many places burnt Sarma’s effigy alleging his inability to smoothly conduct the examination at 855 centres.

Many AASU activists came out to an open space in Jamunamukh on Monday and burnt Himanta Biswa Sarma’s effigy and blamed it all on him for the bunglings.

SEBA and Sarma initially refused to admit the question paper leakage incidents but after chief minister's intervention the examination was rescheduled.

22 Jan 2016 - 6:46pm | Pankaj Sharma
An LPG Cylinder of domestic use got burst  on Thursday night at the house of one Ibrahim Ali. Injuring 5 persons of the family  during the blast. The injured are being treated in Nagaon...

1 Mar 2008 - 3:38am | editor
The recent blast that rocked Tezpur town killing one person was engineered by ANLA. This was confirmed by the police saying the ANLA cadres have planted the bomb at the bicycle. Sources here say the... 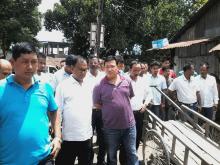