The general election to the students union of Mazbat College of Udalguri was held recently. Bodoland Students' Union had a great feat as 7 portfolios of the students' union were bagged by their backed students. The major portfolios including General Secretary by Tussar Dutta, Vice-President Indrajeet Deka, Cultural Secretary Biki Prasad were won by the B.S.U candidates. No untoward incident was reported during and after the election as informed by college sources.

ULFA diktat on I Day

12 Aug 2017 - 3:31pm | AT News
The United Liberation Front of Asom (I) has announced boycott call of the Independence Day alleging colonial exploitation by the ruling clique in distant Delhi. In a statement issued here on... 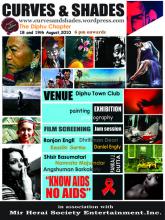 Painting and photography exhibition at Diphu

14 Aug 2010 - 2:36pm | editor
A painting and photography exhibition will be held at Diphu on August 18-19 which is being organised by Curves & Shades. Exhibitions by “Curves & Shades” has attracted due attention...

'Gamusa' politics come on fore during festivals only

20 May 2017 - 2:40pm | Daya Nath Singh
Gamusas and Japis are two important items in Assam, which are in much demand throughout the year in the state especially during festival seasons and social functions. These items are demanded by the...