Stephen Corry,Director,Survival International,responding to allegations made by Assam Environmental Forum regarding the matter of negative publicity given on Kaziranga National Park authority by BBC,says that it was in the interest of the wildlife and people living around Kaziranga NP that the matter was raised.The full text of the clarification by Stephen Corry is as follow:“The Assam Environment NGO Forum asks what Survival International’s motives are for calling for a boycott of Kaziranga National Park (NGO slams Kaziranga propoganda, March 5 2017). Survival International has only ever had one motive: to protect tribal people whose rights are threatened. We condemn the poaching of endangered animals but we do notbelieve that conservation should be at the expense of human life.The facts around Kaziranga speak for themselves.50 people have been killed by park guards in the last three years alone.Many more have been injured,including a seven year-old-boy who has been left severely disabled after being shot by a guard. Communities who are living near the park face the threat of violence and eviction from their homes.We believe that if tourists and travel companies continue to visit Kaziranga,they are complicit in this violence.All we ask for is an end to guards shooting people on sight and forced evictions from tiger reserves. We believe that India’s forest departments should listen to tribal people, who are, after all, the best conservationists”.

11 May 2008 - 11:47pm | editor
Barely 24 hours after the fierce gun battle of Army with DHD(J) militant camp at Heralu in North Cachar hills district, altogether seven people have been killed on Sunday while they were working with...

6 Jan 2012 - 3:19pm | Anup Biswas
The Jadikhe Naisho Hosom (JNH) vehemently condemned the killing of Donald Sengyung and urged upon the government to uproot the evil designs of all such miscreants and nab the culprits involved and... 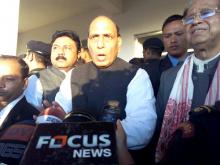 All out against NDFB-S: Singh

25 Dec 2014 - 6:34pm | AT News
An all-out offensive is underway against NDFB-S two days after the militants killed at least 70 innocent villagers in five serial attacks in Kokrajhar, Chirang and Sonitpur districts on Tuesday.This...