People of Udalguri have welcomed Ishan Barua of Asom Jatiya Bidyalaya, Tangla,who will present his science project in the NCSC (National Children Science Congress) national meet to be held in Gujrat at Gandhinagar from December 28 to 31.Ishan has been selected as a member of the 25 member Assam NCSC team at the state level NCSC meet held at Kokrajhar from October 25 to 28 for his project titled "Preservation of tomato by indigenous method",which was appreciated by scientists at Kokrajhar session.Ishan is the son of Nabajit Barua and Lanita Barua,residents of Ward No 4 in Tangla town in Udalguri district.Gunidhar Boro,principal and Manjul Barua teacher of Asom Jatiya Bidyalaya.Tangla expressed satisfaction at the selection of Ishan for national level session.According to them the selection of Ishan would inspire more students of the district to participate in scientific activities in future.The Udalguri District Journalist Union and Aryabhatta Science Centres of Udalguri district committee congratulated Ishan Barua for his selection in the state NCSC child scientist team. 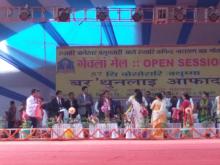 7 Feb 2018 - 9:42am | AT News
Kokrajhar: Baksa Nwgwr ground falls silent. The Bodo Sahitya Sabha concluded its 57th annual conference in this historic place in Musolpur on Tuesday. The concluding day marked with a colourful...

NHRC unhappy with crimes against woman

30 May 2012 - 3:47am | editor
The National Human Rights Commission has expressed grave concern over the cases of crime against women in Assam. Wrapping up its camp in Guwahati on Tuesday, NHRC chairman Justice (retd) K G...