As many as 21 foundation stones were lay by BTC chief Hagrama Mohilary at different places on Tuesday itself in the presence of official and publics in Dhubri and Kokrajhar districts to pave way more development and integration in the region.

BTC administration has been getting 1000 crores from centre as one time special grant for the financial 2017-18 through which council has been initiating new more developmental projects to gain more projects in four districts in the region. A total of 21 new projects have been ventured in Kokrajhar district itself under one time special grant to construct various projects in education,culture,Bathou Thansali,river protection, college building,crematorium, district libraries etc.

Mohilary told that the BTC administration has been taking more new projects in the region with centre’s 1000 crore onetime special grant. He said that laying of foundation of stones would be done on phase manner in the districts.

‘BTC will be getting more developmental projects in various field through centre’s onetime special grant for the financial year 2017-18’,Mohilary said adding that council region is stressing for bringing more human based developmental among society in the region. 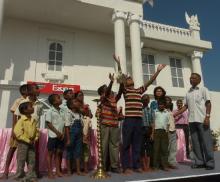 5 Nov 2008 - 4:03am | Nanda Kirati Dewan
The 9th International Expo which was scheduled to begin from 31st Oct. 2008 began today with a peaceful note. The inaugural program was rescheduled following bloody Thursday episode. The expo was...

26 Apr 2012 - 7:32pm | editor
Security forces arrested a self-styled leader of a new militant group at Gahpur in Sonitpur district on Thursday. The nabbed militant was identified as Bipul Bora and he claimed himself as the self-...

Congress ahead in Sivsagar district