“To understand nationalism as an historical reality it its essential to step outside the history that nationalism gives to itself. Undoubtedly, this historical description is not entirely homogeneous and its axis shifts according to the political demands and exigencies of different periods. Still, there is a clearly identifiable narrative, which despite all its internal variations can be called the nationalist history of nationalism, says Sudipta Kaviraj.

Though Kabir Khan of 'Chak De' India tried his utmost to bring the sense of 'Nationalism' within the team but in reality its a democratic revolution under the bourgeoisie hegemony. Though the subaltern voices tried to speak out by adjusting and adapting to changing conditions at times yet it was subjugated.

We as a nation don't deserve to survive because the very notion of 'We the Nation ' does not dovetail. An imaginary institution called India is coloured with caste, creed, regions, tribes and what not. But today, this imaginary institution has even lost the essence of its pseudo-nationalism.

India's Northeast or Northeast India – (a term which I don't find any other euphemism to describe) is always been subjugated and even neglected in terms of its growth, development and prosperity. A region I believe might not produce commercial stars like Indian 'Men in Blue' but Northeast can at least stand with their head high in front of these effeminate so called stars in terms of athleticism. Monika Devi - the Manipuri girl was the lone weightlifter in the 56-member strong contingent to represent India in the 69 kg female category at the Beijing Olympics this August has been banned from flying from New Delhi with her fellow sports persons.

Monica was pulled out of the competition for allegedly testing positive for an anabolic steroid. Indian weightlifting Federation(IWF) secretary BR Gulati stood by Monica, saying the tests might not be valid because the Indian Lab is not an accredited one, “The test conducted is regular. The Indian Lab is not accredited by World Anti Doping Agency (WADA) and it does not follow procedures .The report was released internally and we have not been given any copy of the report. I suspect some malafide intentions behind the whole controversy” Gulati said.


The IWF conducted a pre-Olympic trial in July where Shailaja Pujari of Andhra Pradesh had performed better than Monica and got the nod for Olympics ,but however she was accused of bribing her way into the team. Shailaja was also accused of doping and also served a two year ban on the game following which Monica was selected in her place.

Sports is a war. A war which sees nothing in front .It just wants to win at any cost. At this juncture Indian sports is full of crime, corruption and commercialization. Indian athletic game have been continuously suffering from this doping controversy since long time and many of them proved positive also. Weightlifter like Harpreet Singh, Kavita Devi are some of them who have been found guilty in doping cases.

But the incident of Monica Devi on June 29 is really unfortunate. The whole incident was a foul play. 'I have never touched any illegal substance and I have never failed a dope test in my life. If all these claims are true I would even go to the extent of ending my life'-Monica Sobbed. A silver and two Bronze medal winner in the Asian Championship in Japan ,Monica's career got a setback which will be very difficult for her to resurrect in her arena. This has been a huge psychological damage to this young Sport person. Though authority has given her a certificate of innocence at the last moment its very late for her to move to her dream destination. We may call it her bad luck or her destiny but in reality it has been a nasty deed done by the Indian Sports Authority.

A nation which dream of Olympic glory and in one word 'national glory' even does not know how to celebrate it. The achievement of Abhinav Bindra as a gold medalist only reminds editors of some newspaper asking their correspondent and reporters to track down India's first Individual Olympic medalist. An unheard name Khashaba Jhadav- a name which was not even celebrated on the Indian sports arena. A wrestler who won a bronze medal at the 1952 Helsinki struggled financially to participate in the event. Kharidkar, where Jadhav studied mortgaged his home for Rs.7000 to send his former student to the Olympics. Despite several request to Moraji Desai for only Rs.4000,there was no help from any side.

And today repeatedly media through its various medium try to convince us the nature of diversity and the colour of India which I believe is an Utopian dream. The sporting career of a young sportswomen has been forced to a position where rejuvenating her mental status is very tough.

Indian heroes- a commercial face, an elitist domination to shape the face will remain in every spheres of every institution. Heroes, like K.D. Jadhav won't be remembered even in his 100th birthday ,but we will dance with the cricketers to make our life large as the big billboards of Yuvraj Singh.

We can't help it, despite all its internal variations an India-Pakistan cricket match again will make the roads empty. 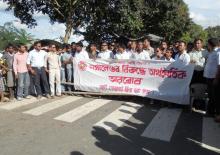 19 Sep 2010 - 1:54am | Ritupallab Saikia
The All Assam Students Union has begun indefinite economic blockade against Nagaland. The blockade has been called in protest against the firing and assault by Nagaland police in Golaghat on...

7 Mar 2008 - 4:09pm | Nava Thakuria
The 10th Guwahati Press Club Inter Media Cricket tournament will begin on March 14 (Friday) at Latashil play ground. Those who are interested to join the tournament may submit a list of 15 members (...

19 Jun 2016 - 11:10pm | AT Kokrajhar Bureau
Family members of Jayabati Roy lodged an FIR with police citating that she was pre-planned murdered by her husband Prafullo Roy on Saturday in the name of cylinder blast at Balagaon village in...