Tobacco - a threat to development

Tobacco users are seen everywhere . Be it developed nation ir developing nation, many people consume or uses tobaccos products . There are some direct consumers while many become victim in directly. It affects individual as well as families. At present , there are around 7 million deaths from tobacco uses and it is predicted to grow to more than 8 million a year by 2030 without intensified action.

Tobacco use costs national economies enormously through increased health-care costs and decreased productivity. It worsens health inequalities and exacerbates poverty, as the poorest people spend less on essentials such as food, education and health care. Some 80% of premature deaths from tobacco occur in low- or middle-income countries, which face increased challenges to achieving their development goals.

The adverse effect starts before using as tobacco growing requires large amounts of pesticides and fertilizers, which can be toxic and pollute water supplies. Each year, tobacco growing uses 4.3 million hectares of land, resulting in global deforestation between 2% and 4%. Tobacco manufacturing also produces over 2 million tonnes of solid waste.

Like many other events and celebration Every  31 May is observed as no tobacco day. World Health Organisation (WHO)  and partners mark World No Tobacco Day (WNTD), highlighting the health and additional risks associated with tobacco use, and advocating for effective policies to reduce tobacco consumption. The theme for World No Tobacco Day 2017 is "Tobacco – a threat to development."

The goals of the World No Tobacco Day 2017 campaign includes highlight the links between the use of tobacco products, tobacco control and sustainable development and encourage countries to include tobacco control in their national responses to 2030 Sustainable Development Agenda.

Another goal is to encourage broader public and partner participation in national, regional and global efforts to develop and implement development strategies and plans and achieve goals that prioritize action on tobacco control. WHO is calling on countries to prioritize and accelerate tobacco control efforts as part of their responses to the 2030 Agenda for Sustainable Development.

Tobacco control has been enshrined in the Sustainable Development Agenda. It is seen as one of the most effective means to help achieve SDG target 3.4 of a one-third reduction globally, by 2030, of premature deaths from noncommunicable diseases (NCDs), including cardiovascular disease, cancers and chronic obstructed pulmonary disease. Strengthening implementation of the WHO Framework Convention on Tobacco in all countries is an additional target to be met by governments developing national sustainable development responses.

The WHO Framework Convention on Tobacco Control (WHO FCTC) guides the global fight against the tobacco epidemic. The WHO FCTC is an international treaty with 180 Parties (179 countries and the European Union). Today, more than half the world’s countries, representing nearly 40% of the world’s population (2.8 billion people), have implemented at least one of the WHO FCTC’s most cost-effective measures to the highest level. An increasing number of countries are creating firewalls to ward off interference from the tobacco industry in government tobacco control policy.

Tobacco control can break the cycle of poverty, contribute to ending hunger, promote sustainable agriculture and economic growth, and combat climate change. No government can bring an end to uses of tobacco . It depends upon many other stakeholders including civil society , media and more importantly individuals as together there is hope to make the world free from tobacco.

(With direct inputs from WHO publication and feedback may be sent to bkranjan@gmail.com)

Gogoi vows to to flush out ULFA/KLNLF

13 Aug 2007 - 3:05pm | pbaruah
Guwahati: The three tier Unified Command Stucture hunkers down here in Dispur on Monday to fine tune a set of strategies to flush out ULFA and KLNLF are now camping Karbi Anglong district to make the... 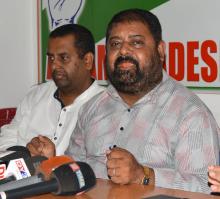 6 Jul 2016 - 3:44pm | AT News
The hike in VAT seems to have fuelled no less protest across the state on Wednesday where many parties and organizations have pinned the blamed on the Sonowal Government.AJYCP activists in large...