Many student bodies in Kokrajhar took out a huge rally in Friday demanding CBI probe into the killing of Lafikul Islam Ahmed which took place 18 days ago.

Many students participated in the rally organised by All BTC Minority Students’ Union(ABMSU) who came from far flung areas of BTAD areas.

The rally started from Rashmela ground via RNB Road,civil lines Road to DC office and later submitted a memorandum to the Chief Minister of Assam through the Deputy Commissioner,Kokrajhar seeking CBI inquiry and justice to the Lafikul Islam killing as soon as possible.

The students also demanded seizure of illegal arms and ammunitions in BTAD region, take necessary steps to check all kinds of syndicates including cow steps smuggling in the state of Assam,make a security vigil to check sfaety and securit of live and properties in BTAD area as well across the state are prominent demands that placed in the memorandum.

He has alleged that government has no intention to nab main culprits, so announcement of CBI investigation has been delayed. He said that involved culprits are flying open in the region,said Sarania.He has urged government to conduct strong investigation into student leader murder case.

The ABMSU and student union bodies set a seven day dateline to the government to make publicly whatever SIT investigation has been doing in its reality investigation. They have warned for vigorous movement if government fail to arrests involved culprits by the days.

Shakamal Khandakar,general secretary of ABMSU alleged that state government has been delayed the announcement of CBI investigtaion into Lafikul killing case,so far it has passed eighteen days from the murder date.He said that police administration as well state government have been failed to check and arrests involved culprits with Lafikul murder case.

10 Dec 2010 - 5:25pm | Daya Nath Singh
Farmers in Hojai subdivision of Nagaon district of Assam are spending sleepless nights due to the fear of land mafias, who are conspiring to grab their agricultural land with the help of a few... 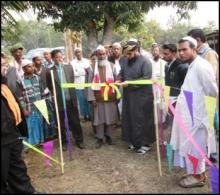 25 Sep 2010 - 5:23pm | Anup Arandhara
A 15-members joint peace committee between the residents of boder areas of Assam and Nagaland was formed at a public meeting held at Hingibeel Bazar on September 24. The people and...