One month has passed since the management has locked out the Borgaon Tea Estate in Biswanath district allowing 70 workers and their family members to languish in dying agony.

Despite repeated appeal, the management is allegedly not in a mood to withdraw the lock out. Even the intervention of the administration has failed to end the logjam.

Caught in confusion, the workers sent a memorandum to additional chief secretary through the local BDO demanding on July 24 demanding immediate intervention. But the deadlock exists.

The workers have alleged that the management signed a tripartite pact with the workers and labour department last year. But not even a single demand has so far been implemented forcing yet another strike.

The workers have alleged that the management has not been resorting autocratic style of functionjngs much to their major inconvenience. Some of the employees have been sacked bereft of any valid ground.

They alleged that the situation in the tea estate was not do uneasy to have announced lock out. They called it a conspiracy to deprieve the workers of some basic amenities' and facilities.

The workers openly expressed grave concern over the lackadaisical attitude of the labour department saying that it department has been failing to deal with the situation.

If any untoward incident takes place then the labour department would be responsible for it.

Exam cancelled due to teachers absence

8 Dec 2012 - 4:32am | Jayanta Kumar Das
Annual examination in Tarabari LP school in Bhergaon sub-division near Tangla could not held due to absence of all the teachers. According to information examinees had to return home without... 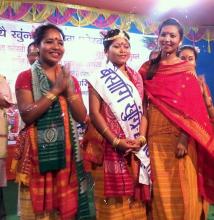 24 Apr 2016 - 11:35am | AT Kokrajhar Bureau
Lakshmi Brahma of Kokrajhar town crown 'Bwisagi Khungri, 2016' in the Bwisagu festival celebration, concluded on Saturday at Habrubari in Kokrajhar, was organized jointly by Kokrajhar Rongjali...

5 May 2018 - 10:43am | Akshaya Pranab Kalita
NAMRUP: Bihu festivity still grips Namrup as the industrial town is holding a three days festival amid much pomp and gaiety. People thronged in thousands at the Namrup BVFCL Public Bihu ...