Guwahati is again waking up to the lip-smacking taste of sumptuous momos. The dates for this festival are August 25, 26 and 27, 2017 at Assam Engineering Institute Chandmari field. This momo festival presented a promising culinary display of taste, flavours and dimensions of momos from different parts of Guwahati city and from the neighbouring states of Arunachal Pradesh, Sikkim and Meghalaya. These festivals are geared to lure the food-loving city crowd whose existence depends on the most happening events in town. 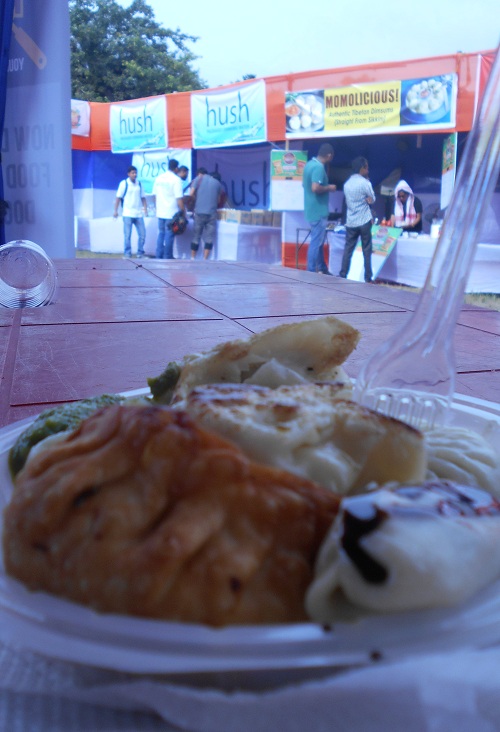 I chose to visit the stall on August 26, 2017 in the afternoon under the scorching sun. I had imagined that the festival will have all the momo vans which are the favourite hangouts for young people all around the city. After an entry fees of Rs.30 one can enter the venue I was pleasantly surprised with colourful stalls and music playing on the background. There was no scope for binge eating or whimsical shopping for momos. One had to plan one’s budget and exchange the money for paper notes which were considered as momo currency.

After a quick look at the stalls and their products, I decided to exchange my money for a fair deal. Exotic tastes of momos in diverse varieties were available. There were known restaurants from Guwahati city which opened up their closed kitchens to lure the momo-lovers. When I went for the festival then only a few stalls were open because of the heat. But the evening seems to be more packed. People came for the DJ beats and the rock show which kept the music flowing along with each bite of mouth-watering momo. Young people in school and college uniforms thronged the stalls in search of their favourite flavours some trying to exchange their hard earned pocket money as well. I settled for a mixed platter of both sweet and savoury momos all in one plate to be able to taste the best of all flavours. In one stall I saw fish dhaniya momo which caught my attention but could taste it as it was not yet ready. Somewhere they sold Chicken Cheese Momos, again somewhere Chocolate Momos. It was indeed a display of creativity, competition and food diversity with the larger context of Momos. One of the stall owners explained to me that Momos originated in Tibet and Arunachal and now people have innovated new taste and flavours. It was indeed a delightful food digging experience. I enjoyed the Afghani Momos, Soy Pepper Momos and Tandoori Momos and wondered how food connected the flavours beyond borders and territorialities. Some people looked for authentic momo tastes while others wanted to experiment with exotic flavours. The prices ranged from Rs.60 for 6 pieces to whopping Rs. 300 also for a set of 9 pieces. In fact branding of momos took place to add dynamic variety to the momo platter. When I visited the stalls most of the stalls were serving fresh momos in plastic plates. There was one counter which taught how to make fluffy momos in 30 minutes also for a cost of Rs. 100. I kept wondering whether anyone would share their trade secrets for Rs. 100 so easily. But all I can say is that variety is the spice of life. Momolicious fans can really enjoy their taste buds in this unique and music flavoured momo fest in Guwahati. Just wished the weather didn’t play a spoil sport to make every momo bite memorable. While you enjoy the flavours of North East Momo Fest 2017 as there is one more day to go, I gorge into my plate of exotic momos with thousand twists.

All out against Swamy

14 Mar 2015 - 10:54pm | SK Hasan
The Nazira unit of All Assam Minority Students’ Union took out a huge rally on Saturday in protest against Dr Subramaniam Swamy’s visit to the state.Hundreds of AAMSU activists hit the streets in...

17 Jul 2010 - 9:38am | editor
Assam Chief Minister Tarun Gogoi on Friday claimed to have improved the state's economy in the last 9 years. Concluding the debate on White paper on Friday in the Assembly, Gogoi said the performance...