The objective of the programme is to create awareness amongst the passed out and current students of Industrial Training Institutes (ITIs), so as to motivate and guide them to choose entrepreneurship as a career option.

7 Sep 2015 - 5:27pm | Subhamoy Bhattacharjee
Physical demarcation of the Kalapahar-Daigurung elephant corridor in Karbi Anglong district got a formal boost after a foundation stone was erected at a ceremony organised by Wildlife Trust of India... 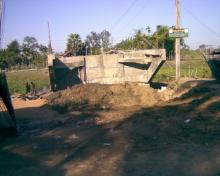