Along with the rest of the state Guru Nanak Jayanti was also celebrated with religious fervour here at Sri Guru Singh Sabha Guruduwara,Tangla on Saturday . Devotees from entire Darrang and Udalguri district gathered to mark the celebration of the 548th birthday of Baba Guru Nanak, the founder of the Sikh faith.The celebration began with a recitation of the Sikh religious book, the Guru Granth Sahib.

After completing the recitation of the Granth kirtan hymns were chanted .Nishan Sahib a Sikh triangular flag made of silk cloth, with a tassel at its end was also hoisted by the devotees.The ceremony was followed by special prayers for the country’s uplift, promoting unity and protecting the people.In the langar special delicacies prepared in the community kitchen were served were people irrespective of their caste, community,religion feasted together ,” said Jarnail Singh Pradhan of the Guruduwara. It is to be mentioned that it is the only Guruduwara in undivided Darrang district established way back in 1957.

22 Apr 2015 - 2:36pm | AT News
Chief minister Tarun Gogoi said that the party leadership will take action against Rumi Nath if the Borkhola MLA is convicted for her alleged nexus with Anil Chauhan. Talking to reporters at the... 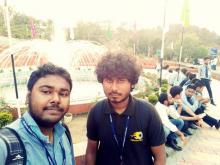