A dilapidated condition of a vital historic road in Assam has forced hundreds of local residents in Dibrugarh to hit the streets demanding immediate steps to repair it.

Led by local AASU leaders, hundreds of people at APL Main Gate in Namrup blocked the Ahom era road connecting Kamargaon in Golaghat and Jeipore in Dibrugarh on Monday causing immense traffic snarl with a period of two hours.

With banners and posters, the protesters thronged the Dhodar Ali to block it for two hours allowing many common commuters to suffer. Raising slogans against the department, the protestors threatened to go for more intensive stir if the authority refuses to listen to their voice.

“We have blocked the road for two hours since the government has not been doing the needful to repair this portion of the vital historic road. See how this portion is languishing. The government is in the know. But sitting idle. We the common people have been bearing the brunt,” said Kalpajit Gogoi, local AASU president in Namrup.

Another AASU leader Jayanta Duwarah said,”we kept waiting for the government. But much to our utter disappointment we have seen that the authority had done precious little. That’s why, we have come out. Without agitation, stir, the government won't act.”

“This is an irony. The road built by the lazy lots in the Ahom era has been remaining dilapidated in the age of science and technology.

“The political leaders and the rulers have no dearth of amenities' to avoid the road. But we don't have the access. We need government intervention to repair the road,” said Amiya Chutia, a local resident.

The protesters later sent a memorandum to the authority demanding immediate steps to repair the roads failing which they would resume to more stir. 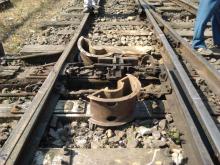 17 Feb 2013 - 9:53am | Anup Biswas
Hundreds of passengers traveling by the Up Agartala Express from Agartala to Lumding were stranded for several hours at Jatinga Railway Station in Dima Hasao following derailment of two bogies of the...

24 Sep 2013 - 5:45pm | AT News
NHPC general manager Anil Kumar Agarwal has been remaining incommunicado even 48 hours after he was kidnapped by NDFB(S) militants even as police arrested three persons in this connection.Police...

8 Feb 2017 - 12:46pm | AT Kokrajhar Bureau
Kokrajhar police have caught Sanjoy Basumatary on Wednesday two days after he and his associate Rupom Roy gangraped a minor girl inside the Chirang Ripu reserve forest. Police arrested Roy on...