The Nagaon police have seized a huge cache of arms and ammunition from a vehicle on Wednesday which believed to have been brought for rhino poaching in Kaziranga. But the persons on question managed to escape the police.

According to information, traffic policeman in Haiborgaon stopped a vehicle bearing registration No AS01- AG 6642 from Guwahati on the National Highway No 34.

The driver and the three persons on the vehicle could not give convincing reply to the questions posed to them regarding the registration of the vehicle.

One  after another persons pulled out of the vehicle and suddenly managed to vanished as the traffic policeman started checking the vehicle where AK 47 rifle, three not three rifles, bullets, ammunitions,brown sugar and sharp weapons were seized.

Search operation is going on in the entire area to nab the driver and the three passengers who are on the run.

17 Mar 2014 - 3:59pm | AT News
Properties worth one crore have been reduced to ashes when a devastating fire engulfed a lodged in Guwahati on Monday.The incident took place at 2 in the afternoon in Birubari because of a cylinder... 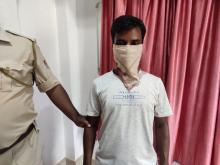 28 Jul 2019 - 8:38am | Dibya J Borthakur
Nagaon: The Nagaon police today apprehended a snatcher from Bhakatgaon bazar.    Identified as Bilal Uddin of Silongoni village , the apprehended person was involved in a snatching...

12 Aug 2015 - 6:36pm | AT News
ULFA C-in-C Paresh Baruah’s mother Miliki Baruah is undergoing treatment at the Sanjeevani Hospital in Dibrugarh where she was admitted on Tuesday. Doctors attending on her said that her...