NAMRUP: After a brief silence feline terror spreads diabolic tentacles in Namrup where a lady was killed and another sustained serious injury in two different incidents of attack on Friday.

The first incident took place at 9.30 in the morning at Majkopohuwa village where a leopard which came down from the Joyepur Reserved Forest in search of food sprang upon Maikon Gogoi as she was sitting in sunshine. She was rushed to the hospital with neck and head injury where she died.

Hours after it another incident took place where a leopard attack a boy from behind in Asomiya Gaon. A seriously injured Udhan Gogoi is battling with death in the hospital. His condition is said to be critical.

4 of a family killed in Diphu

19 May 2009 - 1:24pm | editor
Barely a few hours after the killing of 6 NDFB cadres during an encounter in Karbi Anglong, unidentified miscreants gunned down four persons of a same family of a Congress ward commissioner in Diphu...

How cruel is NCC instructor!

31 Aug 2017 - 5:08pm | Shajid Khan
How brutal and careless might be corporal punishments in the schools? Can you imagine. Believe it or not: A 14-year old student lost his eyesight after he was ruthlessly beaten up by an NCC... 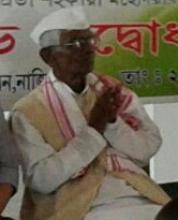