GUWAHATI: The United Liberation Front of Asom (I) has deeply condoled the loss of Rajen Deka who was killed at an encounter with security forces in Udalguri on Friday wee hours.

In a statement issued here, the rebel outfit heaped huge praise on him for his sacrifice saying that he died fighting with the security forces thinking not even an iota of his life. The rebel outfit has declared him the martyr. 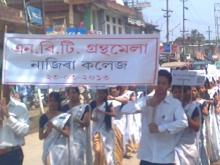 24 Mar 2013 - 8:31am | SK Hasan
The First book fair of Nazira organised by the National Book Trust of India in association with the civil administration of Nazira and Probah has started at Nazira Gandhi Moidan on March 23.... 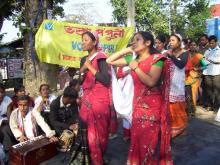 Street play against atrocities on women

20 Dec 2008 - 7:14pm | Ritupallab Saikia
In order to create awareness among the public about the increasing incidents of atrocities on women, “Sanmilita Nari Adhikar Suraksha Mancha” has started a two month long mass awareness...