DUDHNOI: A local court in Dudhnoi granted bail to Akhil Gogoi three days after the police arrested him in a case and brought him from Dibrugarh.

The Chief Judicial Magistrate on Tuesday heard his bail plea and granted it refusing to read the police who arrested him.

Gogoi would be released on Wednesday from the Central Jail where he was sent on Sunday.

Hundreds of KMSS leaders and workers thronged the court premises as the court was hearing the bail plea in the morning.

Minutes after they got to know the court order granting the bail they shouted slogans against the BJP-led government alleging a conspiracy to gag the voice of protest.

Many KMSS leaders and workers from far flung areas of the state are camping in Dudhnoi to greet Gogoi who is expected to come out of the central jail on Wednesday. 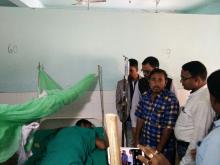