Violence erupts in BTAD during bandh

Bandh supporters in many places turned violence and set afire a few vehicles to enforced the bandh call. Some other supporters staged dharna opposing BPF’s stand on land rights of the non Bodo lots in BTAD areas.

An auto driver sustained serious injury when a section of bandh supporters in Choraikola area attacked him and poured petrol on his vehicle for defying the bandh call. He is batting with death at a hospital.

Some other supported enforced the bandh by burning tyres on the road apart from attacking a few drivers.

Vehicles are remaining off from the roads from 6 in the morning. Shops and markets, schools and colleges, banks and offices remained closed under the impact of the bandh which ends on Wednesday morning.

Hundreds of trucks and other vehicles are remaining stranded at various places along the 31C national highways in the area under the impact of the bandh.

Security forces lobbed tear-gas shells in Sidli to disperse the a crowd of supporters who  blocked the 31C national highway(NH).

A group of bandh supporters  torched a bike at Chandrapara in Kokrajhar which belonged to Dwipayan Narzary, a teacher at UN Academy Kokrajhar as a teacher was coming to Kokrajhar via Chandrapara from Banargaon area.An FIR has been lodged against incident with police.

14 Jan 2008 - 4:07am | editor
A day after the powerful blast, an eerie silence is prevailing in Paltanbazar even as the police have claimed a major breakthough into the incident. All shops and markets in the area are remaining... 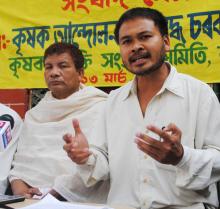 14 Mar 2010 - 4:47am | editor
Social activist Akhil Gogoi on Saturday daredChief Minister Tarun Gogoi to prove his alleged link with ULFA or Maoists. Talking to reporters in Guwahat,i Gogoi, who is spearheading the movement of...

31 Oct 2010 - 8:44pm | editor
Meghalaya police have recovered a huge cache of arms and ammunition from ULFA from a school on Saturday. Accoridng to information, these arms and ammuniton were found inside an abandoned suitcase...