SHILLONG: Meghalaya Editors & Publishers Association(MEPA) has strongly condemned on the high handedness of the Assam Police who mercilessly assaulted a Mizo journalist as she was covering the simmering conflict along the Assam-Mizoram border last week.

In a statement MEPA president RM Shabong said the journalists have their own liberty to be present on such un easy situation and that the Assam Police should have allowed them to perform their duty without favour or fear.

MEPA asked the Assam government to institute an enquiry into it and to punish the elements responsible for it since the incident has made a huge dent in the image of the police force.

MEPA extends its support to our journalist friends in Mizoram and wishes for their fast recovery of the injured persons. 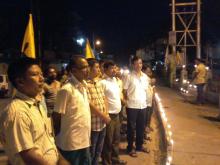 28 Jul 2015 - 7:56pm | Hantigiri Narzary
ABSU activists and common people of all walks of life condoled Dr APJ Abdul Kalam’s death by lighting candles in Kokrajhar on Tuesday.Hundreds of people thronged the Pragati Bhawan in Kokrajhar and...

13 Aug 2009 - 3:48am | editor
We hereby appeal to the people of Assam and Northeast India to celebrate the Independence Day on 15th August to pay tributes to the patriots and martyrs who suffered and sacrificed their lives for...

Polling in progress for KAAC amid tight security

4 Jan 2012 - 3:00pm | editor
Amid tight security pollings are in progress for the Karbi Anglong Autonomous Council on Wednesday. The polling began at 8 in the morning to end at 4 in the afternoon. The turn out is said to be...
Follow @Assam Times