TEZPUR: Amid an escalating acrimony across the nation over sexual crimes, yet another incident sends huge shock and anger in Assam where a minor girl was raped and killed in Biswanath on Tuesday.

The incident took place in Balichang where Shiv Kumar, a local resident of Diring killed a 12 year old girl. Before killing, he allegedly raped the minor on Monday.

But the entire incident came to light only on Tuesday and acting on a formal complaint the police have arrested the accused who is being interrogated.

On the other hand, hours after the incident came to light, local residents in large number stormed into the Balichang police station premises demanding capital punishment of the perpetrators. 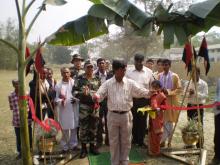 27 Feb 2010 - 11:27pm | Jayanta Kumar Das
65 Field Regiment of Red Horns Division constructed three market sheds to be used as village Haat in Barnadijhar, a remote village in the district of Darrang at the cost of Rupees six lakh under...

7 May 2013 - 9:24am | Rubee Das
Jahar was thankful to the doctor because he got well very soon. Well, the doctor and others told him repeatedly to continue his medicine for six months but he was very confident that he had got rid...

24 Feb 2014 - 8:54am | AT News
A massive security is in place in Guwahati to foil the KMSS agitation for land pattas to the people living in the government land.Security forces are fanning atop the hills areas in the city looking...