The BSU is a student's wing of ruling BPF party.  The student body said that their strike will continue until their verious demands including appointment of a new VC, filling of various posts in the university fulfilled.

26 Aug 2015 - 9:15pm | Prosper Marak
A capacity building and awareness program for the youth groups and village community for protection of community forest and biodiversity was held Tuesday at Jaksongram Village in Baghmara in West... 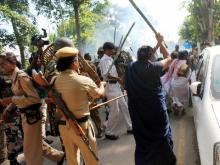 21 Aug 2013 - 9:25am | Ritupallab Saikia
The police and jawans of CRPF resort to lathi charged and also used tear gas shells to disperse agitating crowd on Tuesday at Golaghat who were protesting against the financial anomalies of the...

BREAKING NEWS : One civilian and one militant killed in encounter in Karbi Anglong

30 Aug 2007 - 6:43am | BandanBharadwaj
Diphu : One militant and one civilian were killed in Rangagara near Rangbong Bay Village in Karbi Anglong. Details awaited