An employment advertisement that caused more inconvenience to applicants than providing them with jobs has resulted in the advertiser to issue a statement regretting the inconvenience and correct the blunder being committed, after the matter was reported in the local media, while the affected ones are questioning if the media can really wash off its hands and whether it should not be held responsible, at the same time.

Abhinandan Vartaman, the Indian Air Force (IAF) combat pilot has earned immeasurable appreciation, for his valour and courage, from the countrymen after the heroics shown by the force and especially him – who shot down an F-16 jet of the Pakistan Air Force (PAF) – that tried to attack Indian military installations in Jammu and Kashmir, in the aftermath of the terrorist attack in Pulwama. The same IAF is, however, caught on the wrong foot in Shillong, lately. Abhinandan, who had to eject after his jet was shot at by the PAF and captured by the Pakistani army returned home to a heroic welcome on March 1 through the Wagah – Attari border in Punjab. 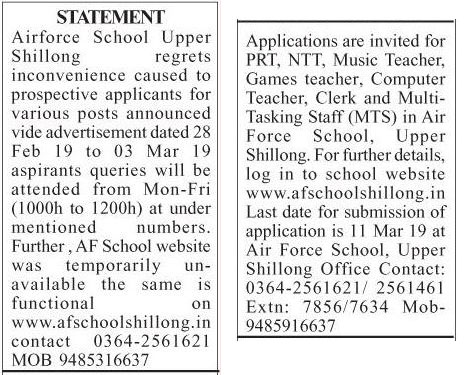 More than 3000 km away from Wagah, here in Shillong, an employment advertisement floated by a school based in the town’s outskirts has gone totally askew. The IAF School located in Upper Shillong has floated an advertisement in The Shillong Times, a leading English daily being published from this town – which also goes by the label, Scotland of the East, recently seeking applications to various teaching and non-teaching positions for the upcoming academic session. The advertisement has mentioned the school website, couple of landline numbers with extensions along with a mobile number but none seems to be of any use for the purpose, claimed infuriated applicants while questioning as to why the IAF had to indulge in such “fake calls”. The IAF School invited applications for PRT, NTT, Music Teacher, Games Teacher, Computer Teacher, Clerk and Multitasking Staff.

The drama started when aspirants tried to contact the school in the landline numbers but none responded to them despite the fact that both the phone numbers were ringing. Next they tried to contact the mobile number, which applicants said was received by a person – who claimed that he is from Ambala, a city and a municipal corporation in Ambala district in the Northern Indian state of Haryana, and knows nothing about why the website of the IAF School, Shillong is not working and also why his number finds mention in the said advertisement. One applicant said that when he called in the mobile number the person on the other side told him that he has received hundreds of calls for the last many days continuously when the callers were inquiring about the employment details of which he has no knowledge. Another aspirant said that the user of the mobile number was exasperated since he had to tell each and every caller that they have dialed a wrong number and his number has perhaps been mistakenly mentioned in the advertisement.

The expired website of IAF School, Shillong which has been restored on March 5, 2019

In the absence of response from any of the landline numbers, applicants said that the mobile number, which was only responding, proved to be a wrong number, too. Further, when these applicants tried to login to the school’s website, www.afschoolshillong.in as mentioned in the advertisement, they found an expired domain name with the message, “This domain name expired on 2018-02-24 15:00:29”. There are opinions from the applicants that how can a reputed school such as the one in question commit a blunder of this magnitude with all the contacts of the school, unreachable. They asked why someone should not feel that it is a “case of fraud”. There are allegations from them that action should also be taken against the daily “whose hunger for revenue through commercial advertisements without checking the antecedents of advertisers cannot go unpunished.” There are opinions that since the publisher do not carry any disclaimer regarding advertisements that appears in the daily, as seen otherwise, they are equally liable for the inconvenience being caused to job aspirants.

Apart from these applicants, even residents of Shillong are bothered about “fake advertisements” and pointed out that this is not the first instance that the daily in question has advertised such a “bogus advertisement”. They referred to another advertisement carried out in 2015-16 seeking property space for installation of mobile phone towers luring house owners with an opportunity to earn heavy rent. On that occasion, residents recalled, that three ‘dubious’ firms were fooling landowners in Shillong with an advertisement in this daily luring them to part with their landed property for installation of 3G/4G mobile towers.

Showing newspapers reports, these residents, said that the three firms – M/s Maa Durga Communication, M/s Shri Ram Communication and M/s Shri Krishna Communication – have floated advertisement for landed space for installation of mobile towers for a monthly rent of Rs 80,000 with one job forcing Meghalaya police to intervene and appealed the residents not to fall trap to such fake advertisements. One such individual who had applied for a tower to be installed in his property said while sharing an approval letter dated 01/01/2016 under the letterhead of ‘Vodafone Tower Pvt. Company Ltd.’ followed by ‘Maadurgacommunication Private Limited’ with the 3G Logo, that he did not pursue the matter further after sensing severe flaws in the firms approach. The resident who received the letter was taken aback by the use of haphazard English and punctuation. “The address mentioned by you has been investigated. Secretly by the registrar office of your area. The rent of tower is 80,000/- (Eighty Thousand) Rs. per month and the advance amount will be 60,00,000/- (Sixty Lakhs). With an agreement of 20 (Twenty years),” the letter states with no address and telephone number except the email address of M/s Maa Durga Communication. The letter further says, “The rent amount is subject to incremented at the rate of 10%. You will have to pay 2,200 (Two thousand and two hundred rupees only) as Registration fee. Kindly take this seriously and avail the service and benefits provided by the company.” What prompted the resident to determine that the offer is fraud was when he google searched M/s Maa Durga Communication and found that it is an electrical accessories shop somewhere in New Delhi.

Now the question that the people are asking is whether the media is at fault here? According to their opinions, since the media is mediating between the advertisers and its target audiences it cannot just wash off its hands and says, “I am not at fault.” They observed that it is alright to generate revenue so long that does not cause any inconvenience to the public or harm in the process with “deceptive”, “biased” contents since “it (advertisements) is not without social costs.”

When contacted for clarification on the matter, the office of The Shillong Times informed that the management of the daily is out of station. Meanwhile, several attempts to contact the IAF School office proved futile, too, since none responded to the calls, which is also an assurance to the claims of the affected applicants. Meanwhile, after the matter was reported by Meghalaya Times, a local English daily in Shillong on March 4, the IAF authorities issued a statement regretting the inconvenience being caused to prospective applicants, in the same daily where the advertisement appeared, while informing that queries will be attended in a given period of time on a landline number without extension and a different mobile number. The statement also mentions that the website of the school is functional, now. 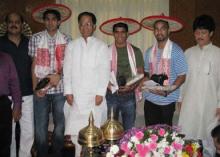 25 Sep 2008 - 3:35am | Nanda Kirati Dewan
Beijing Olympic bronze medalist boxer Vijender Kumar along with other boxing heroes Jitender Kumar and Akhil Kumar were today given a formal felicitation by the Chief Minsiter Tarun Gogoi at his...

Focus on changing spirit of fiction

28 Dec 2014 - 3:51pm | AT News
The world of short fiction has markedly changed over the years, said short fiction writers at the Guwahati Lit Fest on Sunday.Participating in a discussion, authors agreed that globalization has more... 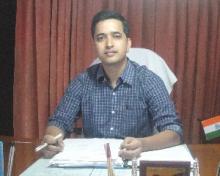