It has only recently completed its shooting portion, but ‘Siyahir Rong’ is already creating a lot of buzz on the social media. The film, based on noted senior political journalist and writer Jitumoni Bora’s acclaimed novel of the same title, is directed by Prodyut Kumar Deka. In 2016, Bora brought out a book that takes an objective inquest into the true nature of journalism in Assam, uncovering a number of concealed truths and stories. Based on his own professional experiences over the past 25 years, his book, published by Bani Mandir, enabled readers to have a refreshing look at the field throughout the 312 pages of the searing novel. The astonishing lengths to which he traversed to unfold the truth behind the façade impressed many, most notably distinguished litterateur Dr Lakshmi Nandan Bora, who found his novel intriguing and exceptional. Modern journalists can actually borrow a leaf out of his work.

Revolving around a daily newspaper, its owner and an honest journalist, this lively story’s script is penned by Prodyut Kumar Deka and the dialogue is written by Jitumoni Bora himself. The film wrapped its final day of shoot on March 5. The last scene, held in the premises of Guwahati Press Club, featured popular actor Jatin Bora, cine-journalist Bidyut Kumar Bhuyan, Mrinal Das, among others. 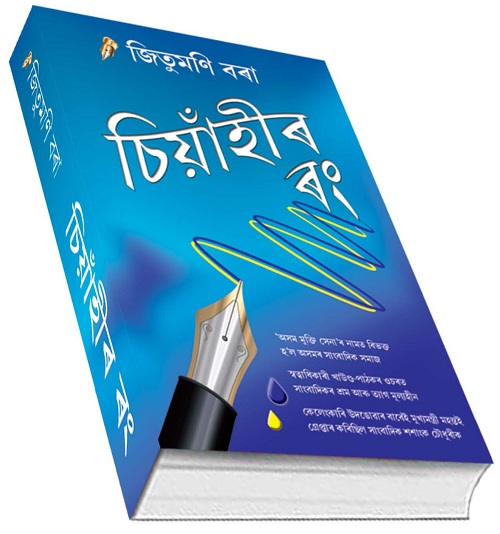 Journalists have had to undergo a lot of dilemmas and pressures in the work place. While making assessments of various issues, be it political or social, they have generally been objective and neutral. They wouldn’t hesitate to swoop on anyone indulging in corruption and immoral practices, be it in the public or the private sectors. However, the problems mostly stem from the fraudulent misuse of power by the newspaper proprietors for their own ends. A number of journalists, vulnerable as they are, are exploited and oppressed by their superiors and newspaper owners, who hold them on a tight leash. Journalists have no option other than to keep quiet or pander to the wishes of their superiors for fear of losing their jobs. There have also been instances where the journalists, who stand accountable to the public for the fairness and accuracy of their news reports, have resorted to dishonesty and deceit.

Journalist Sasanka Choudhury - the main character of ‘Siyahir Rong’, has to face the ire of the government and is sentenced to a jail term for refusing to compromise with his ideals. On the other hand, journalist Simanta Saikia fights relentlessly against the malicious motives and corrupt practices of his newspaper proprietor. As a watch-dog of his society, he is aware of his responsibilities for the greater good of society. A man of strong convictions and beliefs, he always strives for freedom and truth. So far, no Assamese film has ever been made or for that matter, no Assamese novel has ever been written that genuinely discloses the dark side of the Fourth Estate – its hidden truths.

The central roles of the newspaper editor, journalist and the newspaper proprietor are played by Towfiq Rehman, Jatin Bora and Alok Nath. The other important roles are enacted by Bidyut Kumar Bhuyan, Kamal Rashid Ahmed, Mrinal Das, Mridupaban Dutta, Melody Patgiri, Mukut Nath, Dristi Naina, Mrinal Bin Qutub, Debika Priyam, child artiste Ragini Bora, etc. The film’s chief assistant director is Rosy Bora, editing by Sanjiv Talukdar, makeup by Shanku Baruah, while the cinematography is done by Ratul Barman. As informed by director Prodyut Kumar Deka, the film, which will be completed by the year-end, will be send to various film festivals.

25 Sep 2010 - 5:35pm | Anup Arandhara
A 15-members joint peace committee between the residents of boder areas of Assam and Nagaland was formed at a public meeting held at Hingibeel Bazar on September 24. The people and representatives of...