Kokrajhar: Former MP and academician Charan Narzary passed away on Tuesday morning at 4.30 am at a private hospital in Guwahati.

He was admitted to the hospital few months back. He was 87.

Narzary was lecturer in Kokrajhar Govt College, and MP from Kokrajhar Lok Sabha constituency. He was also a writer. He was also founder general secretary of the Plains Tribal Council of Assam (PTCA).

Born on 28th May,1933 at Hatimata in Kokrajhar, Narzary was regarded as prominent political leader among tribals of the state.

24 Jun 2011 - 8:27pm | Ritupallab Saikia
Government’s much wanted policy of Right to Education through Sarba Shiksha Abhijan has failed to yield fruitful result in Golaghat District, where still more than 2000 young Indians are... 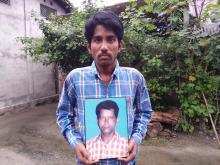 30 Oct 2017 - 7:25pm | AT Kokrajhar Bureau
Even after nine-years, passed of the October 30 serial blasts victims are crying for full Compensations In Kokrajhar town, 20 persons lost their lives and left 60 injuried in the three serial blasts...

24 Mar 2015 - 8:14pm | Raktim Baruah
A high level enquiry has been initiated against some officials of Assam Transport Department for their alleged involvement in illegally collecting money from trucks. Based on the memorandum submitted...