A Janata Curfew that misses aims

Guwahati: PM Narendra Modi's nationwide clarion call of Janata Curfew to fight the killer COVID19 missed the target on Sunday in Assam if the schemes of things in many parts of the state are any indications.

In many places people who kept themselves confined to their homes whole the day spilled to the streets at 5 in the afternoon ringing bowels and dishes to thank the health workers for dedicated service to the nation.

Even in the capital city of Guwahati defying curfew people in large number took out processions contrary to what they were supposed to do.

"We love our PM.  We stand by PM Modified who appealed to us to do so, " said a housewife at Manipuri basti in the city.

A thread to show the #COVIDIOTS in India.. #JantaCurfew went wrong!! pic.twitter.com/AR6zbKoO7j

Manik Deb,  a retired school teacher said that never the PM said so.  " His appeal was misunderstood.  He urged the people do these for a minutes at home to thank the health workers," said Deb.

These took place in many rural, urban and semi urban areas by a section of the people to took the PM's appeal other way.

The curfew was imposed to restrict the public gathering and these activities like procession has itself contradicted the aims in full view of the policemen who remained mute.

Sashi Sekhar Das,  a college student in Jorhat called it a government failure to mobilise the mass to help them get rid of the menace. 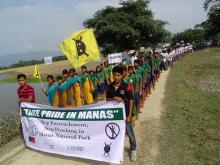 20 Mar 2009 - 12:39am | Dibya J Borthakur
The Bank of India recently opened a new branch at Natun Bazar area in Nagaon district which is recognised the 12th of its kind in the State.Inaugurating the branch, Deputy Commissioner, Nagaon, Dr J...

1 Feb 2014 - 12:25pm | AT News
Opposition consensus candidate for the upcoming Rajya Sabha polls Haidor Hussain accused Congress of trying to kidnap a section of opposition legislators to ensure win in the polls slated for...