The show was opened with Altaf Mazid’s humorous documentary Kunir Kutil Dasha in Sylheti language. While introducing the film, the director also introduced and felicitated the writer Rama Bezbaruah whose original work Kilakutir Kutil Dasha, published in a Assamese daily Khabar, inspired him to make the film. He also narrated the interesting incidents behind the making of the 12 minutes long film. Interestingly, the film is about a neglected part of human body, the elbow, which the director portrayed with much élan.

It was followed by 46 minute long Smile Pinki in Bhojpuri and Hindi. Made about operation done upon some the cleft-lip children in rural UP, this Oscar winning venture of Megan Mylan was really worth watching. Not only the fate of Pinki, but the beautiful locales of UP, the technical perfection and mostly the human interest attached to the film kept the audience awestruck.

The last of the screening was Bollya Pitaeir Sohoki in Assamese and Bodo. It was a 90 minute documentary feature about the river Pagaldiya. The docu-feature brought out almost all the aspect of the river in both its banks.

A sizable number of audiences were present in the show. 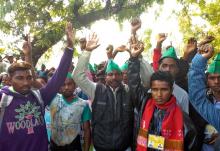 12 Feb 2019 - 9:43am | AT Kokrajhar Bureau
Adivashi Sengal Abhijan and Jharkhand Desam Party, Assam state committee  carried out a rally and staged protest dharna in Kokrajhar on Monday, demanding  ST status to the Adivashi...

Gogoi comes up with steps to check infiltration

22 Nov 2008 - 3:27pm | pbaruah
Boxed by circumstances, the Assam government has come up with a slew of measures to deal with the infiltration from across the porous Indo-Bangla border. These include detention camp in the border...

6 Aug 2012 - 2:55am | editor
There is report of escalating tension in Chirang district following recovery of the bodies and there are reports of minority community protesting on the streets against the death of the three men....