Sixty five per cent voters exercised their franchise in the 14 polling stations in three Lok Sabha constituencies in Assam which went for repoll on Sunda. The repolling which began at 7 in the morning and ended peacefully at 4 in the afternoon. Repoll was held in 14 polling stations - Kokrajhar parliamentary constituency (9), Mangaldoi (4) and Jorhat (1) following complaints of anomalies during polling in the second phase on April 23 last.

24 Dec 2014 - 4:55pm | AT News
The Assam government has confirmed that the death toll in the serial NDFB-S serial attacks in Sonitpur, Kokrajhar and Chirang districts has gone up to 68.   According to chief minister... 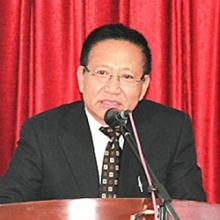 17 Feb 2017 - 9:43am | AT News
Bowing down to the pressure mounted on him by the protestors, TR Zeliang is learnt to have put in papers as Nagaland chief minister on Friday. The huge development took place immediately after...

10 May 2016 - 11:31pm | AT Kokrajhar Bureau
One person identified as Komin Boro, 30 was shot dead by unidentified miscreant at Kawlibhanga village under Tangla PS in Udalguri district today. According to source, two motorcycle borne...