Barpeta : Union Bank of India is planning to open Rural Development & Self Employment Institute (RUDSETI) in Barpeta District of Assam, where young entrepreneurs will be imparted training on various activities for stating their own venture with the help of financial assistance from Banks. This was communicated by S.L. Dikhole, Deputy General Manager of Union Bank to reporters.He also announced the opening of 50,000 "No frill" accounts in the Northeastern Region by the end of
March 2008 and out of this about 5000 "No Frill" accounts have already been opened.

Dikhole also added that they will set up RUDSETI in collaboration with National Bank for Agriculture & Rural Development (NABARD) and it will be the first of its kind institute in North East which will offer wide variety of trainings including carpentry, weaving and fishery etc. In North Eastern Region, the Bank has a presence in Assam, Meghalaya and Tripura with almost 50% (25 nos) branches located in the rural areas 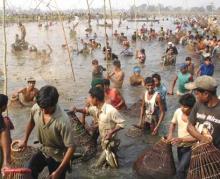 21 Jan 2014 - 11:54am | AT News
A rare done of good news awaits Congress party in Assam in the time of Lok Sabha polls if a pre poll survey is any indication.Lokniti-IBN National Tracker poll finds an impressive poll prospect for...