This 31st July Nagaon is going to witnessed multi-corner fight between candidates mainly supported by Congress and BJP-AGP combine. Though, the total 26 wards are being scattered in many parts of the city, the secular polarization of votes is what going to count most besides past performances of political parties on local issues dealing with basic amenities like food, water, light and inner-roads. The ward no.-6 is presently represented by Congress Ms. Dipti Das, but now its candidature is being replaced by Minati Singh in the on-going fight with BJP candidate Renuka Debi Nath. The 4380 voters of this ward is spreaded in Milanpur, South Haiborgaon locality, whose main plight lies in non-availability of drinking water in evening, lack of proper inner connecting roads and street lights. Even, the supply of drinking water in morning time is not sufficient as per demand raised. Ward no.-14 is being represented by Farookh Hussain of Congress at present and he is repeated by Congress against AGP candidate Saiful Islam. The local claims that most of the work is carried out by present councilor in satisfactorily manner and given the chance he will come upto marks again in this election. The area is covered as Fauzdaripatty, Hatipur, GNB Road, Masjid Path, Khagiroad Path etc and with more than 2400 voters in its kitty people here will vote for work done like Road, Drainage, Employment Scheme, Kalpataru (special program for youth upliftment with employment generation), Widow and Sr. Citizen Pension scheme to name a few. But, they still think that work on BPL, Drainahe cleaning on regular basis are needs prime attention by the coming councilor. The city market area Daccapatty is covered under ward no.-15, where a lot of development works is going on, but the rain makes condition havoc both for local shopkeepers as well as commuters on the way. The fight here is directly between Congress representative Ms Jyotsana Goswami and AGP (BJP supported) candidate Ms Mukta Jaiswal. One of the city most prominent residential area is covered by ward no.-16, which is presently represented by Congress Mr Kishore Das and he is again carrying people hope and aspiration to do something better than past. The area primarily covers Fauzdari Mahal, Police Area, Bangali Patty- Kali Bari, GNB Road, Gurudwara Road, Quttubuddin Path etc. As per people verdict (with 2734 voters on roll) he has done some new road construction like Bangali Patty, Children Park and Street light on main roads of this ward. The local Kirtan Ghar boundary wall and Namghar/Thakurbari wall construction is some of the work being claimed by Congress representative. On the other hand, his rival AGP candidate Mr Paramjeet Singh claims that total in five years span work just begin when election times comes near and rest of the period is simply wasted despite of having fund at hand. So, development clearly means working throughout the five years span, not only in last few quarters, he laments. The last ward as per number is 26 currently represented by Congress Subhas Banik, but this Bangali dominated ward is now replaced by Conress Mannita Das Sutradhar against BJP candidate Ms Kalyani Mondal alias Renu. The 3500 voters is spreaded in Purbakhand,Paschim Khand and Uttarkhand primarly covering Mori Kolong Rly Station and Chakitop areas. The other prominent candidate of this ward is CPI(M) Ms Geeta Mondal. The water supply woes including bad conditioned inner-roads is major issues, which need to be considered by coming councilor besides other civic issues. 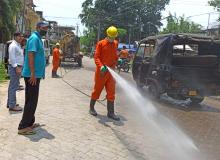 21 Jun 2011 - 11:01pm | Pankaj Sharma
In a tragic and heartening incident of a love story ending up in a a disaster, here at Nagaon on Monday. One Shobit Bora (35) called his girlfriend Binita Das (15) to meet near Hatigaon railway...

8 Mar 2019 - 8:35am | Shajid Khan
The Pradhan Mantri Gram Sadak Yojana scheme under the Ministry of Rural Development, Government of India which envisages to provide good all-weather road connectivity to unconnected villages has...