One rare species of bird belonging to Cuckoo family has been rescued at Orangajuli tea estate on the morning of August 7.Nature loving Ananta Bagh CEO of Green Valley Forest and Wildlife Protection Society, Nonaipara (near Indo-Bhutan border) had found the injured bird while he was traveling through the garden roads. The bird measuring 10 inches of length with one broken leg, was taken to the Gariajhar veterinary dispensary for treatment.In the absence of the doctor, other staff members arranged first aid to the bird before it was taken to Nonai forest Range Office.Range Officer,Haladhar Kalita received the injured bird. He thanked Ananta Bagh and assured him that proper treatment would be arranged before letting it go free. According to him,the bird belonged to cuckoo family. Journalist and lecturer of Tangla college,Debanga Mahaliya latter identified the bird to be a lesser cuckoo found in the Himalayan and Tibet region. 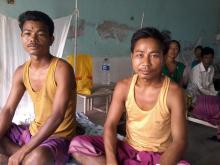 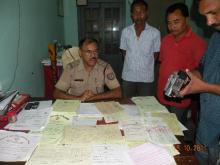