At stroke of midnight, on 15 August 1947, India became an independent nation. This landmark event was preceded by Pandit Jawaharlal Nehru's famous speech titled Tryst with destiny.

“At the stroke of the midnight hour, when the world sleeps, India will awake to life and freedom. A moment comes, which comes but rarely in history, when we step out from the old to the new, when an age ends, and when the soul of a nation, long suppressed, finds utterance..... We end today a period of ill fortune, and India discovers herself again.” Our country is celebrating the 60th year of its Independence this 15 August 2007 . Independence from its imperialistic rulers—a sweet fruit of the bitter toil by our ancestors and freedom fighters. “They gave up their today to give us our tomorrow,” a sacrifice that can never be repaid by this generation. The young generation, the future of India has taken their freedom for granted and seem to have become complacent of their present status which had been passed on to them by their patriotic ancestors. The freedom struggle has only become a lesson in the school curriculum that has to be mugged up correctly in order to spill out in an examination paper. Apart from the beauracrats and a few others 15th August has become just another holiday for us to sit back and recoup from our busy lives. These days how many of us actually pay respect to the national anthem? It is the duty of every Indian to stand up as soon as one hears the national anthem whenever wherever he or she may be. But sadly very few of us practice this in our daily lives. However, it would be wrong to say that the youth are totally devoid of nationalistic feelings, their way of expression may differ but deep down the sentiments are the same—love for their motherland. Many of us participate in the flag hoisting ceremonies that take place in their respective alma maters or localities while many hoist the tri colour in their own homes and vehicles. Patriotic SMSs are exchanged and the ubiquitous accessory of today’s youth—the cell phone tinkles with patriotic songs in the form of ring tones or hello tunes. Some express their solidarity by wearing tri coloured caps and the less adventurous prefer to catch the Independence Day celebrations that are telecast in the television. Sadly our hard earned freedom seems to have lost its glory in the quagmire of the new age “imperialism” that the country is facing in the form of religious riots, ethnic clashes, regionalism and terrorism. Many parts of India are burning in the pyre of hatred emanating from the above causes. Probably, its time, for us to once again take steps, for the people to unite and stand up for their rights and fight against these internal demons to protect the nation’s honour and unity. Our country is a gift to us by our ancestors let us not let their sacrifice go in vain. And the young generation needs to lead the way. Jai Hind!

Permalink Submitted by jaay on Thu, 06/12/2007 - 03:24
Ã¢â‚¬Å“Young generation needs to lead the wayÃ¢â‚¬Å“. Very true, but in this time and space I often wonder whether all the sacrifices that were made were worth all the efforts or not. If I start from Kashmir, trail my way to Uttar Pradesh through Punjab, and then cross over to Bihar and then move to North East (7 Sisters) and turn around to move down to Jharkhand, move toward Gujrat, running into Maharashtra and then dig deeper into Andhara and move into Tamil Nadu, I am wondering where do I rest? Which is the place where I can sit and tell those great people who laid their lives, Look this is the place which was worth fighting? All we are left with people looking for their cultural identities, states trying to convert boundaries based on culture? When I watch the Republic day parade on television, sometimes I wonder, are we this BIG? Or are we just trying to pretend that everything is OK. We need to focus on nation as an entity which was a dream to these national heroes and I agree with you, young generation have a bigger role to play. President Kalam worked on a concept, but I donÃ¢â‚¬â„¢t know if we live to see it materialize, we have lot work on before itÃ¢â‚¬â„¢s too late, to start with, if we can start with just believing that we are great nation, a nation and heritage to be proud of ,it could be a small but good beginning. And yes, of course, JAI HIND. Nice thoughts. 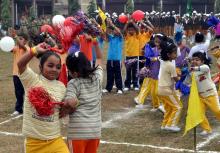 NDFB sticks to the gun for Bodoland demand

4 Oct 2008 - 4:10pm | editor
The National Democratic Front of Bodoland is stick to the demand for a separate Bodoland if general secretary of the Bodo outfit Govinda Basumatary is to be believed.Talking to a private TV news...

21 Apr 2016 - 8:30pm | AT News
Journalist and democracy expert Bidhayak Das, who is presently based in Yangon, the former capital of Myanmar, emphasized on better tie with the neighboring country. Delivering a talk on the changing...