In recent times, blogging has touched the lives of every individual one way or the other. During the last general elections, we saw BJP’s prime ministerial candidate LK Advani using this dynamic medium to spread the principle of his party to all the netizens of the country, and even those living abroad. The US presidential election also saw wide use of this medium by the political parties and candidates to propagate their respective issues.

The north-eastern part of the country has also not remained untouched by this ever-growing phenomenon in the virtual world. Today, we can see various blogs on various topics emerging from a section of educated net enthusiasts, most of whom are youths.

Herein, I would like to make mention of www.karbi.wordpress.com - one of the most popular and emerging ethnographical site from this part of the world. This particular site is one of the first ethnographical site from Northeast India and as the name suggests, is based on the Karbi people living in Assam. Today, on an average, this blog receives 40 clicks per day, which is literally unheard of for an ethnographical site. The achievement becomes even more special when one realizes that in 2003 when the blog was first started, the site used to receive a meager four clicks!

The blog has been conceptualized, designed, maintained and the matters resourced by Morning Keey Phangcho – a young ethnographer who has been following his field of study with much passion. The blogsite boasts of having contribution from Dr. Philippe Ramirez, the pioneering social anthropologist from the France National Centre for Scientific Research. Dr. Pascal Bouchery, a senior lecturer of Social Anthropology, University of Poiters, France and also Dharam Singh Teron, who is a noted cultural activist of Karbi Anglong.

Today the blog attracts maximum traffic from researchers and cultural activists from around the world. The blogsite is also recognized by University of Heidelberg, Germany in its SavifaGuide as most trusted Internet Resources on the Culture of South Asia. In the meantime, due to the quality of the field reports published in the site www.karbi.wordpress.com, Morningkeey Phangcho has been able to earn laurels from each and every nook and crevice of the society for his work on the Karbis.

Dr. Philippe tells me: “Having myself worked with Phangcho, I was able to appreciate his high intellectual curiosity, his great knowledge of the Karbi culture and his exceptional mind openness. I consider him as a true professional social anthropologist,” Starting from scratch, today the site boasts of already getting traffic of around 19,500 clicks and has been able to inspire other communities of the State like the Tiwas, Dimasas, Misings, etc to start their own ethnographical websites.

The site www.karbi.wordpress.com is the site you must visit to know everything about the Karbis of Assam as it boasts of well researched article on kinship, political system, rituals, mythology, folklores and tales to the present social behaviors of the Karbis in every aspect, which only a true ethnographer can think of. The site also contain various article of academic values like the meaning of Mikirs, name of all the clans of the Karbis, political system of both the hills and the plains, census data pertaining to the Karbis etc. Meanwhile, the administrator of the site Morning Keey Phangcho continues with his work passionately. Recognizing his intellectual curiosity and credibility as a true ethnographer in the making, he has also been involved by one of the most reputed scientific institution in the world CNRS (Centre National De La Researche Scientifique) within the project on “Languages, Cultures and Territories in Northeast India”.

Permalink Submitted by Mosphy M.Taro on Mon, 14/06/2010 - 18:18
KARBIS HAVE ROOMS TO IMPROVE THROUGH ETHNOGRAPHY. KEEP UP, INVITE MORE INTERNATIONAL FIGURES

Permalink Submitted by Joydeep Banerjee on Wed, 30/11/2011 - 01:30
Kudos to all the people who have worked towards this. I being born and brought up in Karbi Anglong have keen interest in knowing everything about my birth place. 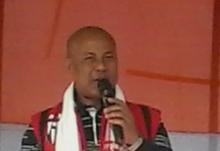 25 Oct 2016 - 3:50pm | AT News
NDA has received a marginal shot on its arm in the move to amend The Citizenship Amendment Bill, 2016 when the Bodo Peoples’ Front has come in full support of the Bill that triggers statewide protest...

8 Jun 2007 - 5:30am | editor
Lakhimpur : There has been incessant rainfall in North Lakhimpur over the last few days. The heavy downpour has resulted in almost knee deep water in the main areas of the town. Residents of KB road...