Assam BJP will take out a massive agitation in December to stop mega dams' construction works in Arunachal Pradesh. Addressing a press conference in Guwahati on Sunday,

BJP state president, Ranjit Dutta said these dams will have adverse impact in the downstream areas of Assam. He alleged that Dispur was all out to support the dams. "We are dead opposed to these construction of big dams in Arunachal Pradesh and therefore have decided to launch an intesified agitation throughout the state. Dutta observed that Congress was in power in Delhi besides in Itanagar and Dispur. "If they want they could have stopped these dams which are facing strong opposition from the local people," said Dutta.

The BJP leader further alleged that Dispur has totally failed to solve the inter state border tangle and that they will make it a poll issue.

31 May 2015 - 3:34pm | AT News
Jyoti Prasad Rajkhowa is all set to take oath as Arunachal Pradesh governor on Monday. Guwahati High Court chief justice will administer the oath of office and secrecy to the prolific writer and... 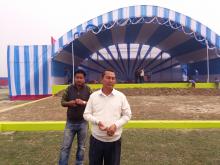 9 Feb 2018 - 10:40am | AT News
Kokrajhar: Massive preparations are going on in full swing to celebrate the 16th Bodoland Day on Saturday. BTC secretariat ground in Bodofa Nwgwr is agog with activities in Kokrajhar since only a...