The people of Puranihiati (Balurchar ) area of Nagaon district is having very difficult time to cross the water-body (char) filled up-to knee-deep level from main market area to opposite side by light vehicles. The small two-wheelers are some how arranged to cross by typical make-shift arrangement by locals using favorite bamboo and wooden materials, but in the case of emergency too the ambulance or another vehicle need to come via long alternate route of 6-7 kmts of extra drive. Its not only create delay in serious matter, but a lot of inconveniences too to the person surrounding the area.

Though, the woes of affected population is being taken care by Govt. by starting the making of concrete bridge to solve the problem, but typical slow progress of project is going to take more time than anticipated before finally bridge can help them in smooth connectivity to both ends. Till then, people of Puranihiati is having very harrowing time waiting for early completion of bridge work. 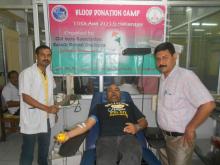 Guwahati Police arrest African for having no valid doccuments

27 Aug 2007 - 1:59am | pragmoni
Guwahati: Guwahati police have arrested one Sow Aly, an illegal intruder from an African country Mali on Sunday afternoon from a city hotel for traveling without any valid documents. He has been...
Follow @Assam Times