No Kaziranga Elephant Festival on 2011

The much awaited Kaziranga Elephant Festival, one of the major tourism event of Assam,which is being held every year in the month of January, will not be held in the year 2011 for some reasons not been disclosed so far. The Forest & Tourism Minister Mr. Rockybul Hussain made the anouncement today at Golaghat. 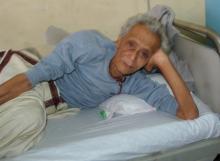 29 Feb 2008 - 11:52am | editor
Renowned Litterature Mohim Bora seen on the GMCH bed as he has been admitted at the Gauhati Medical College Hospital in Guwahati on 29-02-08 after his health is reported to be unwell for the past few...

27 Mar 2015 - 3:05pm | Hantigiri Narzary
The election fever grew up in BTC as few days left scheduled on April 8 next,the AIUDF party has also lunched their campaigns putting own candidates and claimed that party will get large majority in...

Gogoi for self employment to alleviate poverty