The legacy of Assam’s culture would be a lot less enriching if we overlook the contribution of the legendary Shri Jyotiprashad Agarwalla. Similarly there are many other non Assamese in Assam who are more Assamese than many Assamese themselves.Assam is not by the Assamese alone but it is a conglomeration of various communities, tribes, sects etc. It’s a melting pot of many cultures.. Assam’s present status its economy would not be what it is without the contribution of the entire society irrespective of what language they speak and which community they belong to. Therefore the recent spate of killings of non Assamese people comes as a shock to every Assamese and saddens him immensely. Assam has always embraced everyone with open arms and absorbed various cultures in its folds. Hence the targeting of a particular community by militant groups has forced people to hang their head in shame. Assam is a land of tolerance and laid back elegance where the people are known for their hospitality and straight forward demeanor. The repeated attacks on Bihari laborers or the non Assamese community is an ugly scar that is to taint Assam’s reputation for years to come.At the same time the people should be prepared that the Assamese too may be targeted in a similar fashion in other parts of the country as repercussion if such a trend continues. Assam is very much a part of India as any other state hence before being anybody else we are Indians first and an Assamese, or Bengali, or Bihari later as is the case in all parts of the nation. We seem to have forgotten the broader sense of the term Assamese, for anybody that has made Assam his or her home is an Assamese just as anyone that stays in Delhi is a Delhiite and so on. The non Assamese community in Assam has made tremendous contribution to the state’s economy as most of the trade and commerce is controlled by them. Be it in the field of food grain, textile, cement etc. They have also paved the way for many youths to establish their own employment avenues. The recent repeated blasts in the fancy bazaar area targeting the non Assamese business community is a conspiracy to segregate them from the community and creating suspicion and terror in their minds by people with vested interests. This is a time for the people to unite and deter these forces from unsettling our peaceful settlement and create cracks in it. If we go back into the pages of History then we would realize that originally many Assamese trace their lineage to the ancient Aryans who had infiltrated India way before the Mughals befriended us. Therefore originally our ancestors came from parts of Central Asia, which proves that we are not Assamese either!Non Assamese people of Assam are an intrinsic part of our social fabric. As most of the daily wage laborers, rickshaw pullers, washer men, etc are non Assamese. Therefore the senseless killing, bombings of innocent people cannot be the solution of any problem but a ceasefire and amicable talks can be.

16 May 2008 - 7:01pm | editor
Suspected Block Widow militants have killed one more person near Haflong on Friday morning to make the sutuation more volatile. According to information, one ZP Roia was killed near Haflong at around... 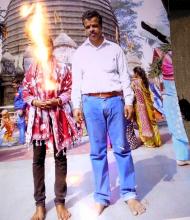 Husband of four caught while marrying a minor at Dimakuchi

29 Mar 2017 - 12:41pm | AT Staff Reporter
In a shocking incident a cheater has been caught recently at Dimakuchi village in Udalguri district after marrying a minor girl student.The capture of the elderly man while marrying the minor girl,...

1 Sep 2015 - 9:14pm | Jackson Tayeng
The Arunachal Pradesh governor JP Rajkhowa urged the youth communities to carry forward the crusade against the growing menace in the north eastern state. In his address at the Solung Festival in...