At last Bokakhat police stepped in to rein in MLA Jiten Gogoi. Police on Tuesday arrested Gogoi in connection with the case No 64/2011 where he was charged with assaulting a woman and her family members. The women had to lodge a complaint with Bokakhat police who arrested Gogoi. But was released on bail after a few hours. Assam time was first to break the story that police registered against the independent legislator for assaulting a woman. But another case was registered against him the next day for unleashing terror at the resident of an AGP leader Girin Gogoi. 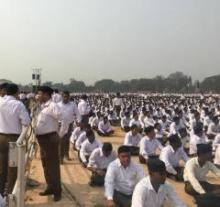 21 Jan 2018 - 6:52pm | AT News
GUWAHATI: RSS on Sunday proved its might of manpower as it held a huge rally in Guwahati where more that 50,000 people patiently listened to Mohan Bhagawat. The rally in the gateway to the...

12 Aug 2017 - 10:28pm | AT Kokrajhar Bureau
At least six persons reportedly dies, including a couple and one is went missing in flood fury in Kokrajhar district till Saturday. According to district administration source, six persons lost their...

27 Dec 2012 - 10:17am | editor
Tension prevails in Tinsukia a day after the owner of a tea estate and his wife were charred to death by a mob of angry workers. The incident took place at the Borduma Tea Estate when the estate...