The first edition of Guwahati International Short Film Festival (GISFF), held on May 2 & 3, 2011, at Assam State Museum Auditorium saw some exciting response from the film lovers and students.

The two day festival saw more than 2,000 people thronging the venue to enjoy the short films from countries like Spain, Italy, the United Kingdom, Netherlands, the USA and Australia as well as all over India under sections like World Kaleidoscope, Indian Kaleidoscope and the competitive North-East Shorts section. Altogether 50 selected shorts were showcased during the two day festival.

The winning short films from the North-East Competitive Sections were:

The opening film of the festival was Guinness Book Record Holder For Most Number Awards By A Short Film- PORQUE HAY COSAS QUE NUNCA SE OLVIDAN (Because There Are Things We Never forget) by award winning director Lucas Figueroa, which has won more than 300 awards till date.

The festival is an initiative by Creovaent Productions in association with Shamiana, the acclaimed short film club from Mumbai.

A jury headed by eminent filmmaker Shyamaprasad from Kerala (director of award-winning Malayalam box office hits like Agnisakshi, Ore Kadal, Akale, Ritu and Elektra) judged the competition films. The other jury members were Assamese actor Adil Hussain (who is acting in Ang Lee’s ‘Life of Pi’, Sridhar Raghavan’s ‘Agent Vinod’ and several other important films in various languages, after having received acclaim in films like 'Gangor' by Italian director Italo Spinelli, 'For Real' by Sona Jain and 'Ishqiya' by Abhishek Choubey), this year’s Aravindan Puraskaram winning director Nila Madhab Panda (whose feature debut ‘I Am Kalam’ has won 12 international awards till now) and internationally-acclaimed Manipuri filmmaker Haobam Paban Kumar (whose documentaries ‘AFSPA’ and ‘Mr India’ have earned global acclaim).

The festival was inaugurated by Shyamaprasad in the presence of other esteemed jury members and guest.

The chief guest for the closing ceremony was renowned filmmaker Gautam Bora who encouraged the platform and said he expected more and more quality short film to come up from North-East India.

The festival, which has National Award-winning film critic Utpal Borpujari, plans to also introduce a section focusing on short films made on mobile phones from its next edition.

12 Jan 2014 - 6:41pm | AT News
Bhogali Bihu begins on Monday. The stage is all set to celebrate the much vaunted event across the state. The day long festival slated for Tuesday begins with feasting and merriment...

Assam Assembly: Several Bills in the line up

3 Mar 2008 - 7:00am | editor
Assam Chief Minister Tarun Gogoi will table the 2008-09 Budget of the State on March 10 in the Assam Assembly which began on Monday with the Governor's address. The Government is all set to place... 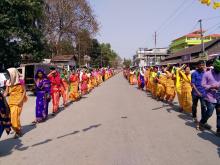 15 Mar 2017 - 1:51am | AT Kokrajhar Bureau
The indefinite hunger strike of ABSU and it's movement group NDFB-P and PJACBM decided to call off the hunger strike by tomorrow early morning following government has given an assurance for holding...