More than 200 supporters of All India United Democratic Youth Front
(AIUDYF) had made sit-in-demonstration for four hours before the
office of the Deputy Commissioner of Dhubri on 4 July and demanded to
stop harassment of the genuine Indian Citizens in the name of
D-Voters. They had also submitted a memorandum to the Honorable Prime
Minister of India through the Deputy Commissioner of Dhubri and it was
forwarded to the Union Home Minister, Union Law Minister, and the
Chief Minister of Assam.

‘’A huge number of genuine Indian citizens are now passing their days
with lots of fear. “Genuine Indian, predominantly Bengali Hindus, and
Muslims (who are marked as D-voters) are living in great anxiety
apprehending arrest. Assam Police are now harassing people of
different minority dominated area of Assam threatening to arrest them
and putting them in Jail/detention camp citing the verdict of the
recent high court’’, the memorandum stated.

The District President of AIUDYF, Jamser Talukdar, who is also the
Secretary of the Dhubri Bar Associaton, alleged that the order of
detention of ‘D” voters by Gauhati High Court is the clear violation
of the Universal Declaration of Human Rights in which it is clearly
mentioned that an accused shall not be termed as guilty unless it is
declared by Judicial court of the country.

14 Jul 2007 - 3:23pm | editor
Guwahati: Noted tea industrialist Hemendra Prasad Barooah has revealed in a new book about being traced by the ULFA to Philadelphia, about his English acquaintance involved in the Great Train Robbery...

27 Aug 2007 - 3:38am | editor
Guwahati: Assam’s veteran artist Khagen Mahanta has been ailing in the city based Down Town Hospital. According to information, the musician was admitted to the hospital two days back. His... 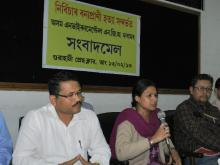 14 Feb 2013 - 4:48pm | Jayanta Kumar Das
Assam Environmental NGO Forum organised a press meet at Guwahati Press Club on February 13 to clarify its stand on the unabated killing of rhinos and other wild animals in the state. Addressing the...