Doubts over completion of BG within 2013

Though the N F Railway has been claiming to complete the Lumding - Silchar BG conversion within 31st December 2013, but the people of Dima Hasao expressed doubts, whether this project could be completed within 2020 even.

The district of Dima Hasao has been blamed for the delay of BG conversion time and again with the plea like poor law and order situation, insurgency, bad road condition and sometime the geological condition of the soil etc. But the people of Dima Hasao are of the opinion that the insurgency was prevailing from 1994 and the foundation for the BG conversion was laid during 1997, and perhaps the work started in 1998. The Railway should have well acquainted with the prevailing situation. Advent of DHD(J) was in the year 2007 and from 2007 to 2009 was the obstructing period for the Railway. Now the people of Dima Hasao argued ‘was it not the responsibility of the Railway authority to find out the root cause of the delay and the escalation of cost of the project?

According to the people here the delay in construction was not only because of insurgency, they believe there are many more factors for the delay. This project was started in 1997 with an estimated cost of rupees 648 Cr but now for the delay in completion cost is escalated to 1800 cr. The people here alleged that the delay was deliberately done only to allow the escalation of the cost of the project.

Though it is fact that the railway authority has been claiming to complete 70% of the project but the stretch from Retzuol to Harangajao has become the headache of the Railway authority. During last fortnight a 300 mts Soil nailing project near Rekho village of Harangajao was totally collapsed which need to be redesigned. People allege that the few companies which are not capable of doing such job were allotted works therefore delay or substandard works are unavoidable.

The people of Dima Hasao however, requested the Authority to be more serious and vigil regarding the construction of the BG conversion though it is fact that today or tomorrow the Railway has to complete be it 2020 or 2030 even.

Once completed, the project will have 31 railway stations between Silchar and Lumding, 255 curves replacing the earlier 544 curves and 20 tunnels instead of 37 tunnels in the metre gauge track. trains can cut their running hours from Silchar and Guwahati from its present 18 hours for a distance of 360km to 8 hours

3 Dec 2011 - 2:47am | Anup Biswas
In the interest of the Hmar community of Assam and towards the prevailing in Assam the Hmar peoples’ Convention (democratic) of Assam declares unilateral ceasefire with Central Government,...

26 Sep 2011 - 1:18pm | Benjamin Kaman
Brahmaputra basin encompassing North East Region of India is one among the water rich basins in the world. Annual available surface water potential of the region (Brahmaputra-Barak basin) is 585.60... 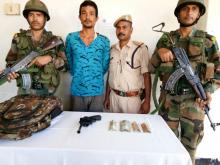 5 Nov 2017 - 8:16pm | AT Kokrajhar Bureau
Security forces in Kokrajhar apprehended an ultra belonging to Rabha Vipers Army (RVA) from Kopati in Karigaon on Sunday. Based on inut about presence of RVA ultras, a joint team of...