In continuation of their agitation at Langting, several hundreds of public from Langting stage dharna in front the Office of the Deputy Commissioner, Haflong on Monday.

They warned the government if the government fails to fulfill their demand of re poll and enquiry, then they would be compelled to go for stronger agitation in near future for which government would be held responsible for any untoward incident. They also disclosed that there might be ‘bloodshed’ if the government ignores their rights. Further they said earlier, they had given ultimatum up to June 10 for the response from the government otherwise they would go for train blockade from June 11.

Earlier, a procession was taken out from Town Committee Field (Lal field) to the office of the Deputy Commissioner and staged sit-in-demonstration.

Later they submitted a memorandum to the Governor of Assam through the Deputy Commissioner, Dima Hasao District, Haflong.

Call off strike: Guv to teachers

16 Sep 2015 - 9:05pm | AT News
Nagaland governor PB Acharya appealed to the Rashtriya Madhyamik Siksha Abhijan (RMSA) agitating teachers to withdraw their strike for the benefits of the students.He said the strike greatly affects... 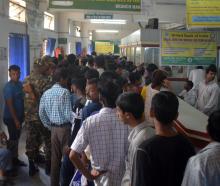 10 Nov 2016 - 8:09pm | AT News
All banks across Assam along with the other parts of the country are heavily busy with responding to the customers who have been making long queue to change the Rs 500 and Rs 1000 demoninatios...

8 Jul 2016 - 7:06pm | AT News
A rising water level of the mighty river Bramhaputra wreaked no ness havoc in Barpeta in the form of flood where Bhogerpar and its adjoining areas have come under the surging waters. These areas with...
Follow @Assam Times